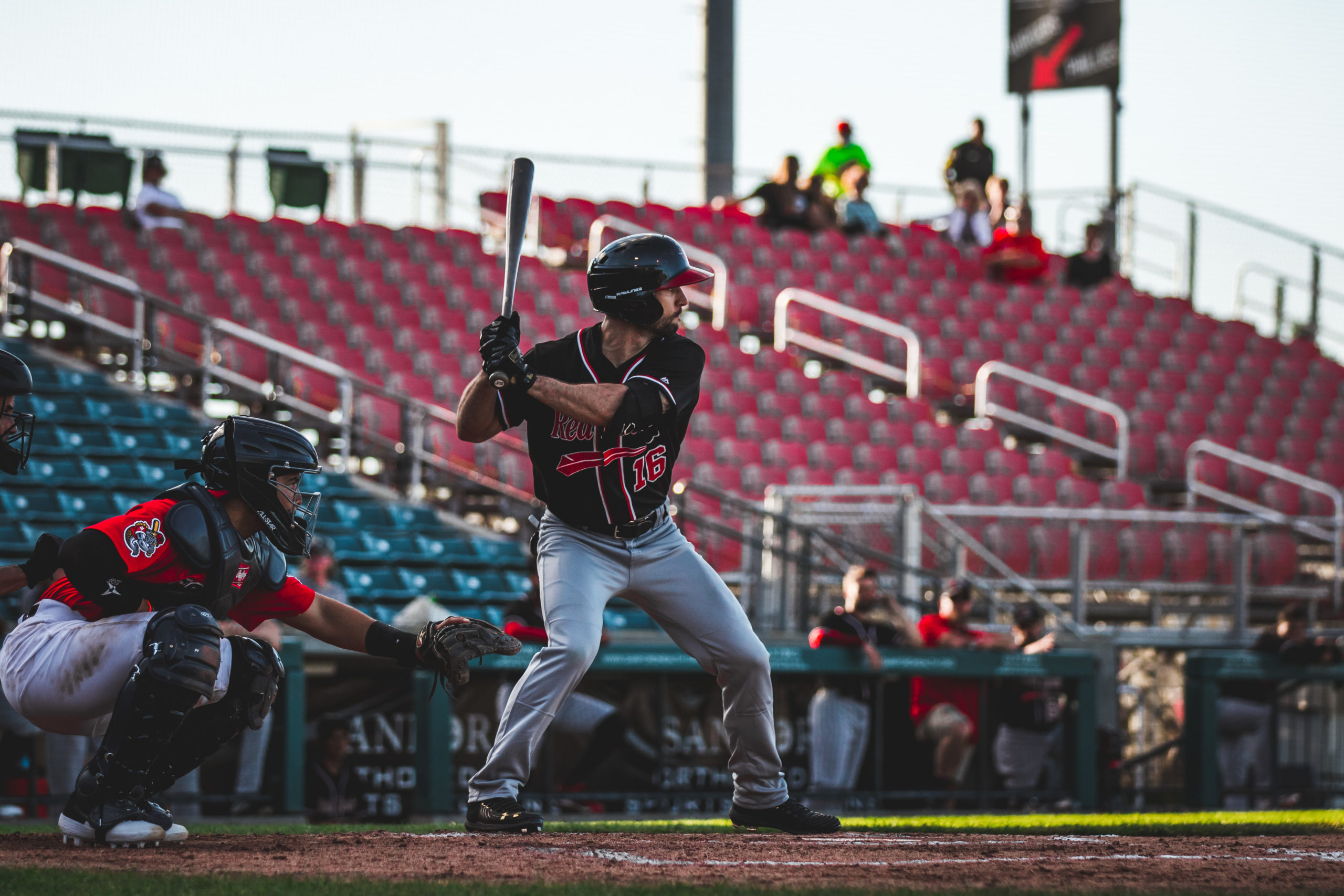 The Fargo-Moorhead RedHawks (3-for-5) held the Chicago Dogs to just three hits as they earned a 3-1 win Saturday at Newman Outdoor Field.

The Dogs scored the game’s first run in the top of the fourth when CF Michael Crouse (2-for-4) singled home DH Joey Terdoslavich but that would be the Dogs’ only run of the day. The RedHawks tied things up in the fight when CF Brennan Metzger (pictured) singled home DH Dario Pizzano and they took the lead in the next inning when 1B Drew Ward drew a bases-loaded walk.

Fargo-Moorhead added an insurance run in the eighth as C Dylan Kelly (2-for-4) doubled to score Ward.

Starting pitcher Tyler Pike earned the win for working 6.2 innings and allowing the one earned run on three hits while recording eight strikeouts. Reliever Mitchell Osnowitz picked up the save by striking out all three batters he faced in the ninth.

The Sioux Falls Canaries (6-2) won their fifth game in a row and maintained their spot atop the standings with a 5-1 win against the Winnipeg Goldeyes on Saturday.

Winnipeg struck first with a single from 1B Kyle Martin in the first inning that scored CF Jonathan Moroney. The Canaries moved in front in the next frame as RF Logan Landon (2-for-3) and LF Mike Hart (2-for-4) hit back-to-back RBI singles. In the fifth, 3B Damek Tomscha (2-for-4) tripled to score SS Andrew Ely and then scored himself later in the inning on a wild pitch.

CF K.C. Huth added the game’s final run in the eighth with a single that scored Hart.

The Goldeyes outhit the Canaries in the game as all nine batters had at least one hit.

The Milwaukee Milkmen (5-2) overcame an early deficit to top the St. Paul Saints 12-4 on Saturday afternoon at Franklin Field.

The Saints took the lead in the top of the second as C Mitch Ghelfi (3-for-4) hit a two-run home run and 3B Mikey Reynolds added a solo shot. But the Milkmen started clawing back in the third as SS Mason Davis plated two runs with a two-out double. Milwaukee took the lead in the fourth when 2B Aaron Hill (2-for-4) hit a grand slam and the Milkmen never trailed again.

Milwaukee added three more runs in the sixth, two in the seventh and RF Zach Nehrir (3-for-4, 3 R) capped the matinee with a solo home run in the eighth. LF Adam Walker also had a strong game at the plate as he went 3-for-5 and scored twice.