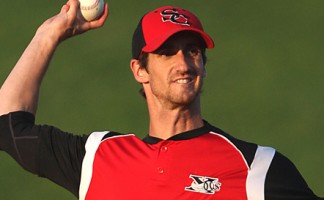 Michael Lang crossed the plate on a wild pitch in the top of the eleventh to secure a 7-6 win for the Sioux City Explorers over the Fargo-Moorhead RedHawks. Explorers’ reliever Rob Wort (pictured) logged the win tossing 1.2 scoreless innings to snap the RedHawks’ six game winning streak. Leading the way for the Explorers at the plate was RF Michael Lang who went 3-for-6 with two runs scored. 2B Jarek Cunningham and SS Nate Samson also had two hits each. Fargo-Moorhead outhit Sioux City 15-9 and were led by 3B Josh Mazzola who went 4-for-5 with a home run.