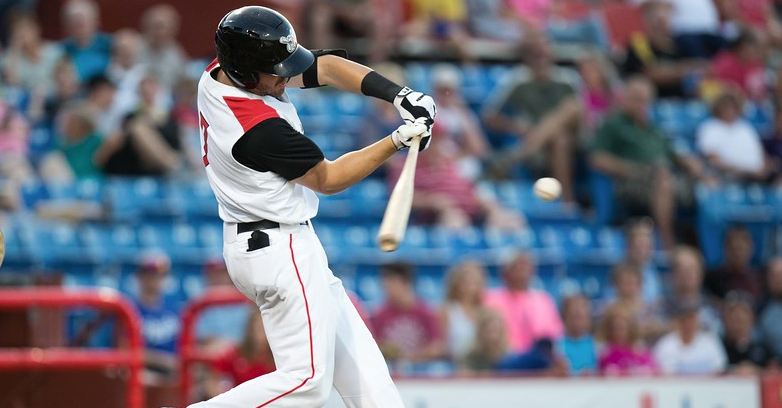 DURHAM, NC- The official statistician of the American Association, Pointstreak, has announced that Wichita Wingnuts OF Richard Prigatano (pictured) has been named this week’s Pointstreak Player of the Week for the week ending August 20.

The Encinitas, Calif., native began his week Monday in a doubleheader against the Kansas City T-Bones. After walking twice in a 5-2 defeat in game one, Prigatano was 2-for-3 with a home run, three RBI, and two runs scored in a 13-3 victory in the nightcap. The Wingnuts took a 7-1 victory on Tuesday night, and Prigatano was 1-for-4 with an RBI. Wichita clinched a series win Wednesday by winning 4-3, and Prigatano was 1-for-3 with a double and a walk, scoring two runs in the process. The Wingnuts ran their win streak to four on Thursday, winning 11-5 in the series finale against the T-Bones. Prigatano was 2-for-5 with a double, two RBI, and two runs scored in the game.

The Wingnuts opened a home series with the Texas AirHogs on Friday night, and after falling 4-3 in the opener, evened the series Saturday night with a 3-2 win. Prigatano was 2-for-3 with a double and an RBI, and got on base a third time via a walk in the win. Wichita closed their week on Sunday, winning 9-5 with a 3-for-5 game from Prigatano. He notched two RBI and scored two runs in the process.

2017 marks Prigatano’s second in a Wingnuts uniform. He hit .256 with 12 doubles, three triples, five home runs and 38 RBI last season in 80 games. Prigatano was an 11th-round draft pick of the Colorado Rockies in the 2014 Major League Baseball draft from Long Beach State University. He played in 55 combined games in Short Season Class A play in 2014 and 2015 before joining Wichita.

The Wingnuts will open a road series at the St. Paul Saints tonight at 7:05 p.m. Central time. The series can be seen live and for free at www.americanassociationbaseball.tv.