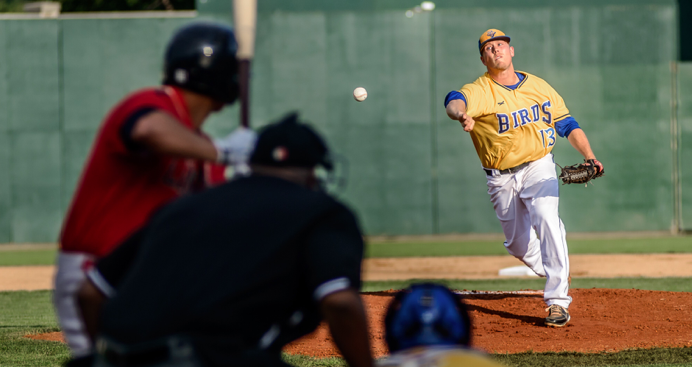 DURHAM, NC- The official statistician of the American Association, Pointstreak, has announced that Sioux Falls Canaries RHP Grady Wood (pictured) has been named this week’s Pointstreak Pitcher of the Week for the week ending August 20.

This week, Wood tossed a complete game on Saturday against the Salina Stockade. He allowed just a run on two hits over his nine innings, and walked two while striking out 10 Stockade hitters. Sioux Falls won 2-1.

Wood was a 10th-round pick of the Seattle Mariners in the 2012 Major League Baseball Draft from Western Oregon University in Monmouth, Ore. He logged four seasons in the Mariners system from 2012-2015, reaching as high as the Class AA level, where he appeared in 36 games with the Jackson (Tenn.) Generals in 2015. Wood spent 2016 with the New Britain Bees of the Atlantic League before making his American Association debut in 2017.

The Canaries enjoy an off day Monday before opening a home series with the Fargo-Moorhead RedHawks at 5:05 p.m. Central time, part of a doubleheader at the Birdcage in Sioux Falls. The series can be seen live and for free at www.americanassociationbaseball.tv.