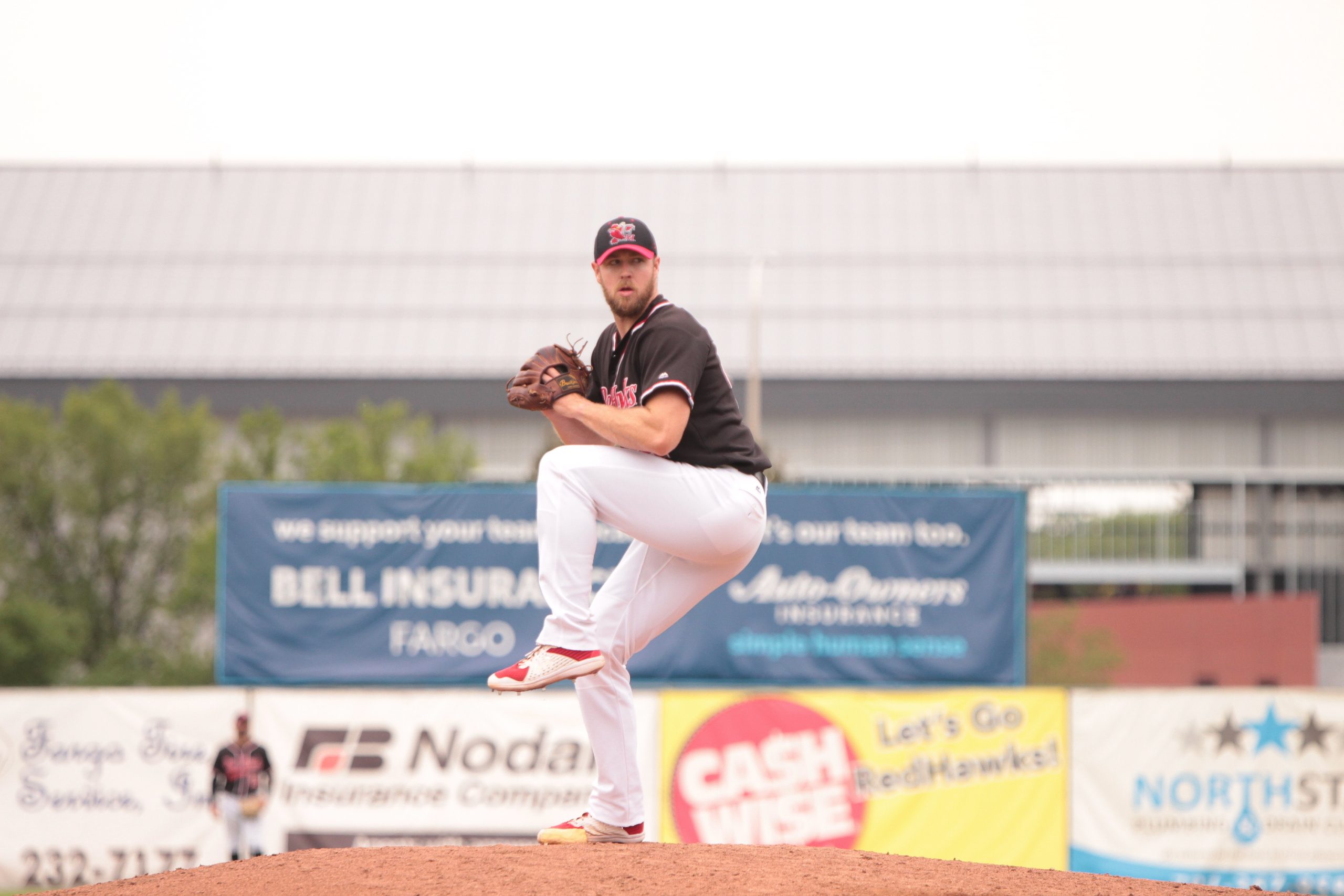 The Winnipeg Goldeyes (26-23) defeated the Fargo-Moorhead RedHawks (34-15) 1-0 at Newman Outdoor Field Thursday afternoon to take the three-game series between the two clubs.

It was the 30th 1-0 game in franchise history and the 15th time Winnipeg has won by such a margin.

The Goldeyes broke the scoreless tie in the top of the eighth inning when rookie Justin Thompson hit a leadoff triple then came home one batter later on a passed ball.

Tasker Strobel entered the game in tthe bottom of the inning in relief of starter Landen Bourassa and recorded the final five outs to pull into a tie for the league lead with his 14th save of the season.

Strobel stranded the tying run at third base in the eighth, then benefitted from a potentially game-saving double play started by third baseman Ian Sagdal in the ninth inning before striking out Evan Alexander with runners at first and second to end the ballgame.

Bourassa (2-1) earned the victory, working seven-and-one-third innings and allowing just five hits. He struck out four and did not walk a batter. The Lethbridge, Alberta native retired nine straight batters between the fourth and seventh innings and allowed just two baserunners over the first six.

Kevin McGovern (6-2) started for Fargo-Moorhead (34-15) and was charged with the loss. He departed the game in the seventh inning after Thompson’s triple, having given up one run on just three hits while striking out six and walking two.

The Chicago Dogs (32-17) struggled to put together much offensive momentum, as they drop the series finale versus the Kane County Cougars (27-23), 3-0.

Cougars’ starter Vance Worley tossed a complete-game shutout in only 103 pitches. The former MLB pitcher allowed four hits and one walk and finished with three strikeouts. The performance was similar to that of Jordan Kipper last night for the Dogs, only this time Worley went the distance.

Murphy struggled to find control early when he walked leadoff man Ernie de la Trinidad. Cornelius Randolph singled to move runners to the corners. Murphy struck out Jimmy Kerrigan on three pitches, but Josh Rolette then crushed a ball to the right center field gap to score a run.

Kane County tacked on a second run off a sacrifice fly to end the inning up 2-0. It marked the third time in four games that the Dogs let up a first inning run.

The Dogs picked up their first extra-base hit of the game with a Stevie Wilkerson double. With Danny Mars and Grant Kay coming up, Worley shut down the power threats by getting them to both ground out. The righty drew 12 ground ball outs, including two double plays.

In the fifth, Randolph again did damage with a double off Murphy. Two pitches later Kerrigan grounded a ball softly to Murphy, but the starter had trouble with the throw and sailed it over the head of first baseman Cosimo Cannella. Randolph rushed home from the error and made it a 3-0 ballgame.

Chicago could not put together any consistent offense against Worley. In the bottom of the fifth, both Mars and Kay struck out. In the seventh, a leadoff single turned to a double play.

All the while, the Dogs bullpen was shutting down Kane County. It did not matter much because of the lack of scoring, but Lawson and Justin Goossen-Brown kept Chicago in the game through its entirety.

Worley got Michael Crouse to fly out to end the game in the ninth to push the game under two-and-a-half hours. Chicago and Kane County split the series and keep the divisional lead at 6.5 games.

The Sioux Falls Canaries (20-29) completed their series sweep against the Sioux City Explorers (20-28) with a final tally of 10-4 while laying out who really was Sioux-perior.

It took less than three hours for this game to be wrapped up and just under 30 minutes for the game to really get going.

Aaron Takacs helped get Wyatt Ulrich home by way of a walk in the bottom of the first and shortly after this the Explorers’ ​​Danry Vasquez scored on an error from the Canaries firstbasemen.

The rest of the game showed conservative scoring from both teams as the Explorers scored one run in the 3rd, 4th, and 5th innings while the Canaries didn’t score again until the bottom of the 7th off of a Zane Gurwitz bases loaded double.

The Canaries went on to score one more run in the bottom of the 8th off of an Ozzie Martinez solo home run and the game concluded with a final score of 10-4.

Previous PostHow Many Home Runs Did They Hit In Siouxland?!?Next PostAmerican Association To Establish Hall of Fame