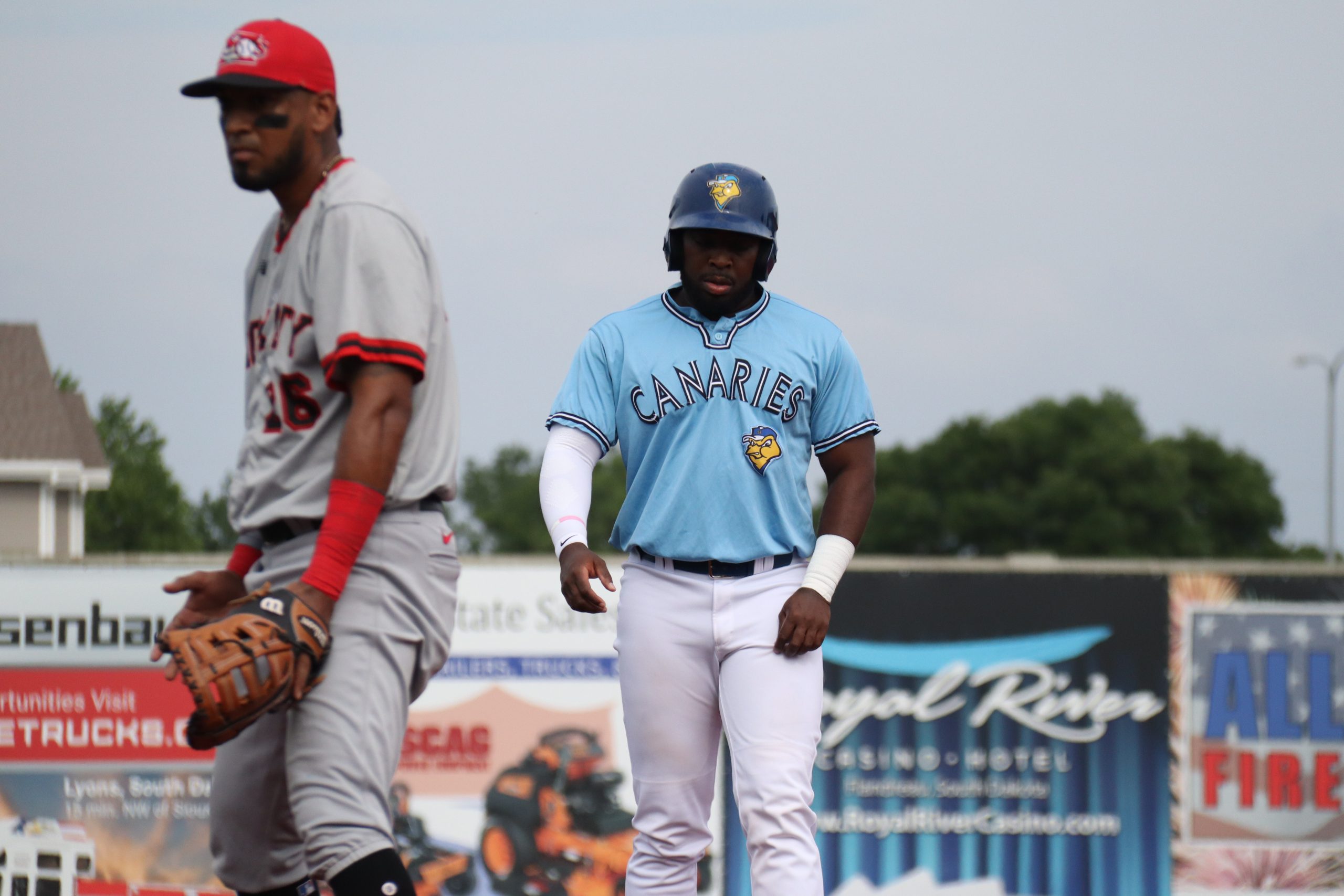 The Dogs broke the tie in the third inning as SS Connor Kopach hit an RBI-single to left field to give Chicago a 1-0 lead.

The Dogs extended their lead in the fifth inning. 2B Grant Kay led off the inning with a solo home run. Kay finished his night 3-3 from the plate. A few batters later, C Ryan Lidge roped a two-RBI double to right field to put Chicago up 3-0.

The Cougars brought one run across in the eighth inning as LF Cornelius Randolph hit a double to right field to make the score 1-3. However, Kane County couldn’t bring any more runs across the plate, falling 3-1 to the Dogs.

Jordan Kipper started on the mound for the Dogs. He finished his night allowing just one run in 7.2 innings. He collected four strikeouts, earning the win and quality start.

In the second inning, a squeeze bunt from C Bobby Barnard gave the Saltdogs an early 1-0 lead.

Lincoln added to their lead in the fifth inning. DH Welington Dotel hit an RBI-single to right field. The next batter, 1B Matt Goodheart, drove in a run before 3B Eddy Martinez roped an RBI-double to give the saltdogs a 5-0 lead.

A double to center field hit by SS Josh Altmann gave the Saltdogs a 6-0 lead heading into the bottom half of the sixth.

Milwaukee’s 1B Keon Barnum hit a two-run double in the bottom-half of the sixth to cut their deficit down to four runs. The Milkmen were not able to get any more runs, falling to the Saltdogs 6-2.

Zach Keenan started on the mound for the Saltdogs. He earned the win and quality start, throwing six innings while surrendering two runs.

The Railroaders scored one run in the third inning to take an early 1-0 lead. RF Hill Alexander hit a two-run home run in the fourth to extend Cleburne’s lead to three runs.

The Railroaders gathered more runs in the fifth inning after LF Chuck Taylor hit a three-run bomb to make the score 6-0.

The Monarchs started working in the sixth inning. 3B David Thompson hit a solo home run. A few batters later, 1B Casey Gillaspie notched a two-run home run to make it a 6-3 ball game.

Cleburne responded, scoring three more runs in the bottom of the sixth to give the Railroaders a 9-3 lead.

Kansas City started chipping away and after a three-hit, two-walk, and five-run inning the Monarchs trailed 9-8.

In the top of the eighth inning, LF Darnell Sweeney hit a two-run home run to tie the game at ten.

Neither team was able to score in the ninth inning. While Kansas City was able to take an 11-10 lead entering the bottom of the 10th, 2B Edwin Arroyo hit a walk-off two-RBI single to center field to win the game for the Railroaders.

After falling behind early, five unanswered runs aided the Lake Country DockHounds (19-31) as they closed out a 5-2 win over the Gary SouthShore RailCats (21-29).

The DockHounds took control in the fourth inning and never let go as they secured their second series win this season at The Steel Yard.

During the contest’s first third, though, Jack Eisenbarger dominated the Lake Country lineup.  In his first start of the season, he fired a shutout three innings, allowing just one hit and one walk while tying his single-game high of six strikeouts.

While he dominated on the mound, the RailCats supported him at the plate.  Nate Scantlin stroked a single to begin their day at the plate and immediately advanced to second base on a groundout. Daniel Lingua then produced a line drive base hit to bring Scantlin home from second and give the ‘Cats a 1-0 advantage.  The run marked their eighth in the first inning in the three-game series.

Two frames later, the RailCats lineup went right back to work.  Tom Walraven ripped a leadoff double into the left-field corner, and Scantlin plated him one batter later through a single of his own, placing Gary SouthShore ahead 2-0.

However, as the fourth inning began, the DockHounds roared back and grabbed their first lead.  Three runs on three hits, a walk, a wild pitch, and a balk turned a two-run deficit into a 3-2 edge.

Lake Country struck again in the top of the sixth.  A Wilfredo Gimenez solo home run put another tally on the board and created separation between them and the RailCats, positioning them up 4-2.

At the outset of the eighth inning, the DockHounds once again got their offense going and manufactured another run.  Jake Snider doubled down the left-field line to lead off, and a flyout moved the runner up to third base.  The RailCats called upon their bullpen to try and curtail the threat, but Tristen Carranza’s bunt down the first base line enabled Snider to scamper home, pushing the score to 5-2.

Following a Lake Country pitching change, the RailCats offense appeared to put pressure on their three-run edge.  Scantlin supplied a leadoff single, his third of the game, and Michael Woodworth walked to send the tying run to the plate.  Nevertheless, the DockHounds found a way to navigate out of trouble.  A controversial triple play quashed the Gary SouthShore threat and preserved their lead heading into the ninth.

Jared Price made his RailCats debut and tossed a scoreless debut in the top of the ninth to grant them a shot at a comeback, but the Lake Country bullpen suppressed any hope for late offense.  They could only muster one infield hit against closer Cyrillo Watson as the DockHounds locked down the victory.

The Winnipeg Goldeyes (25-23) beat the Fargo-Moorhead RedHawks (34-14) with a final score of  5-3 at Newman Outdoor Field on Wednesday night.

Tied at 3-3 in the top of the seventh inning, Justin Thompson doubled to right field leading off.  Three batters later, Max Murphy rifled a two-out double into the right field corner that scored Thompson with the lead run.

Deon Stafford Jr. was hit by a pitch leading off the top of the eighth and scored the Goldeyes’ fifth run when Kevin Lachance’s bunt single resulted in a throwing error down the right field line by third baseman Leobaldo Pina.

The Goldeyes received four shutout innings from their bullpen with Bryan Blanton, Travis Seabrooke, Erasmo Pinales, and Tasker Strobel each working a scoreless frame.  Strobel pitched the bottom of the ninth and earned his 13th save of the year.

Winnipeg took a 1-0 lead in the top of the third on a two-out, solo home run to left-centre from Reggie Pruitt Jr.

The RedHawks tied the game in the bottom of the inning when Evan Alexander tripled to centre leading off and scored on a Christian Correa groundout to third.

Manuel Boscan opened the bottom of the fourth with an opposite-field home run to left-centre to give Fargo-Moorhead a 2-1 lead.

With two outs and no one on base in the top of the fifth, Thompson came back from a 1-2 count to draw an eight-pitch walk.  After Pruitt walked, Ian Sagdal singled through the right side on an 0-2 count.  Thompson scored on Sagdal’s base hit and was followed by Pruitt with the go-ahead run when RedHawks’ right fielder John Silviano overran the ball.

Drew Ward led off the bottom of the sixth with a home run to right-centre that tied the game.  The RedHawks then loaded the bases with no outs, but Sagdal made a diving catch at third to rob Alexander.  The play resulted in Rymer Liriano being doubled off first base for the second out.  Two batters later, Blanton struck out Sam Dexter to strand the bases loaded and keep the game tied at 3-3.

An extremely quick 7 inning game (1 hour and 42 minutes) started slowly until a single run was scored by the Explorers in the top of the 3rd by Tyler Rando on a sacrifice fly.

This was followed up in the top of the 4th when leadoff hitter for the Explorers, Danry Vasquez, cranked a solo home run.

That solo home run would be the last earned run for the Explorers and the perfect incentive for the Canaries to get their bats going.

Gavin LaValley was put out in the bottom of the 4th, but helped score Jabari Henry. Henry would once again have an impact on the box score in the bottom of the 6th scoring on a 3-run home run from Aaron Takacs which put the Canaries ahead 5-2 going into the final inning of the game.

The Sioux Falls Canaries (19-29) defeated the Sioux City Explorers (20-27) in Game #2 of their doubleheader with a final score of 4-3. This secured the series win for the Canaries.

Trey Martin hit a double for the Explorers in the top of the 1st and scored Chase Harris in the process putting the X’s up by one.

The Canaries’ Shamoy Christopher responded in the bottom of the 2nd with a 2-run home run and they scored again in the 3rd with a Jabari Henry solo home run.

Two solo home runs were hit by the Explorers in the 4th and the 5th innings by Gabe Snyder and Zack Kone making that 4 runs in a row scored from solo home runs.

This home run spree set both teams in a tie and pushed the game into extra innings. In the bottom of the 8th, Henry waked it off with an RBI single, scoring All-Star Wyatt Ulrich.