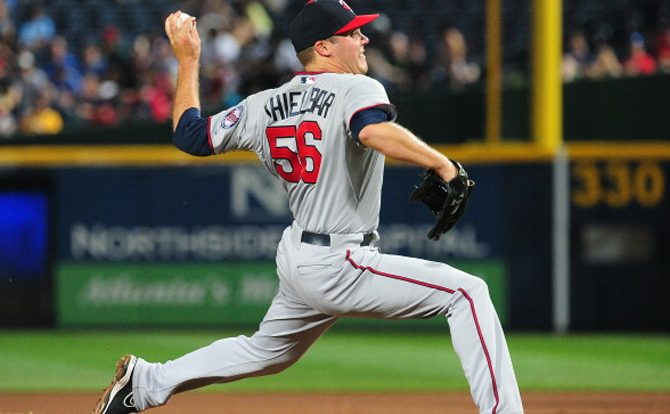 It was two days before Chris Colabello got his first major league opportunity that teammate and fellow Independent Baseball graduate Caleb Thielbar was summoned from the same Rochester Red Wings to join the Minnesota Twins.

The southpaw reliever, only 26 and a mere 21 months from having his contract sold to Minnesota by the St. Paul (MN) Saints, has strung together four scoreless innings in two appearances for the Twins, allowing only one hit in the interleague games against National League East-leading Atlanta.

Thielbar told me from Detroit today (Thursday), where the Twins start a series tonight, he did not expect to reach the majors “this quickly” after leaving the Saints. “It has been quite a ride.” But he had plenty of praise for the American Association, telling MLB.com: “The competition there was actually really good. We had a lot of good players on our team and I learned a lot. I don’t think my time with the Saints hurt me. That’s for sure.”

Unlike Colabello, Thielbar was drafted out of South Dakota State and played two seasons in the lower ranks of the Milwaukee farm system. He jumped through the Minnesota farm system from Class A to AAA last season, and struck out 34 hitters (eight walks) in 26.1 innings this season (1-1, one save, 3.76). “I tried to take last year and roll it over into this year,” he told me.

While the Saints have produced 19 major leaguers through the years, Thielbar is the first to graduate to the Twins, who once upon a time made fun of the crosstown team.

A Quick Trip Around the Bases

Some quick hits that deserve attention…The Kansas City (KS) T-Bones cut loose with a five-home run inning, including back-to-back-to-back blasts to establish a new American Association record, and Ben Moore of Sioux Falls, SD earned his 40th victory to take the all-time lead in the same league…brothers Brandon and Jordan Tripp had never started in the same game as professionals, but when they did each hit a home run to help St. Paul, MN to an American Association victory. Neither has homered again…lefty Clay Zavada, who went from Southern Illinois (Frontier League) to eventually pitch for the Arizona Diamondbacks, recently returned to the game to pitch for Gary, IN of the American Association…Lincoln has two hitters off to huge starts with Dennis Raben and Ian Gac both driving in 11 runs in the first seven games.

(Bob Wirz also writes about Independent Baseball on www.IndyBaseballChatter.com. Fans may subscribe to this Independent Baseball Insider column, which will be published 40 times in 2013, at www.WirzandAssociates.com or comment to RWirz@aol.com. The author has 16 years of major league baseball experience with Kansas City and as spokesman for two Commissioners, and lives in Stratford, CT.)