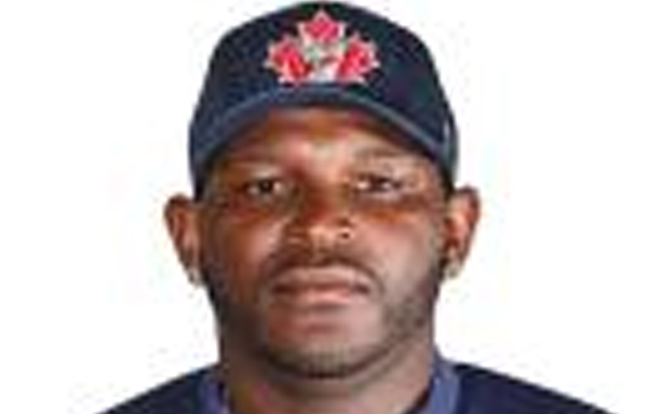 The Winnipeg Goldeyes continued their fantastic start to the 2013 season as they improved their record to 7-0 on the season with a 4-1 victory over the Lincoln Saltdogs. Winnipeg had 11 hits on the night with four players having multi-hit games. Goldeyes DH Leonard Davis (pictured) went 2-for-2 with two doubles and a run scored while C Luis Alen had two hits and drove in a run. Winnipeg starter Mark Hardy tossed a terrific game en route to his second win of the season. Hardy went 6 1/3 innings allowing an earned run on five hits with nine strikeouts.

It was all St. Paul in this one as the Saints rolled to a 9-1 win over the Sioux Falls Canaries in game one of the doubleheader. St. Paul’s top of the order led the way offensively as 1B Dan Kaczrowski, 3B Joey Becker and 2B Brad Boyer combined to go 6-for-9 at the plate with four RBI and five runs scored. Saints Wes Roemer moved his record to 2-0 on the season with the victory. Roemer tossed 5 1/3 innings giving up an earned run on two hits with six strikeouts. Sioux Falls LF JP Ramirez collected two hits in the loss.

The St. Paul Saints sweep the doubleheader as they defeated the Sioux Falls Canaries in game two by a 10-8 final. Leading 2-1 entering the sixth inning, St. Paul scored three runs to push their lead to 5-1. Sioux Falls fought right back in the bottom of the frame and scored four runs to tie it at 5-5. The Saints took the lead again scoring three runs in the top of the eighth to take an 8-5 advantage. The Canaries came back once more in the bottom of the inning and plated three runs to tie it up at 8-8. Finally, St. Paul scored two runs in the top of the ninth to go up 10-8 and would hold off Sioux Falls to get the win. Saints LF Jose Hernandez had a 2-for-4 game with three runs scored while RF Brandon Tripp went 2-for-5 with a home run and two RBI.

Terrific pitching was on display at Lawrence-Dumont Stadium tonight as the New Jersey Jackals nipped the Wichita Wingnuts, 1-0. The starting pitchers, New Jersey’s Craig Heyer and Wichita’s Ryan Hinson, were superb. Heyer went seven innings allowing only five hits while striking out three batters. Hinson, on the other hand, went eight strong innings giving up an earned run on five hits with 13 strikeouts. Heyer was the winner as he evened his record at 1-1 while Hinson was the hard luck loser and saw his mark drop to 1-1. The only run of the game was in the second inning as Jackals 3B Nick Giarraputo scored on a double by 2B Jose Cuevas.

The Grand Prairie AirHogs picked up their first win of the season as they doubled up the Amarillo Sox by a 6-3 score. Grand Prairie 2B Brandon Pinckney went 2-for-4 on the night with two runs scored and a RBI while 1B Andres Rodriguez collected two hits and drove in a pair of runs. AirHogs starting pitcher Josh Strawn earned the victory as he threw six innings allowing three earned runs on seven hits with a walk and six strikeouts. For Amarillo in the loss, CF/RF Chris Valencia had a 3-for-5 game with two runs scored.