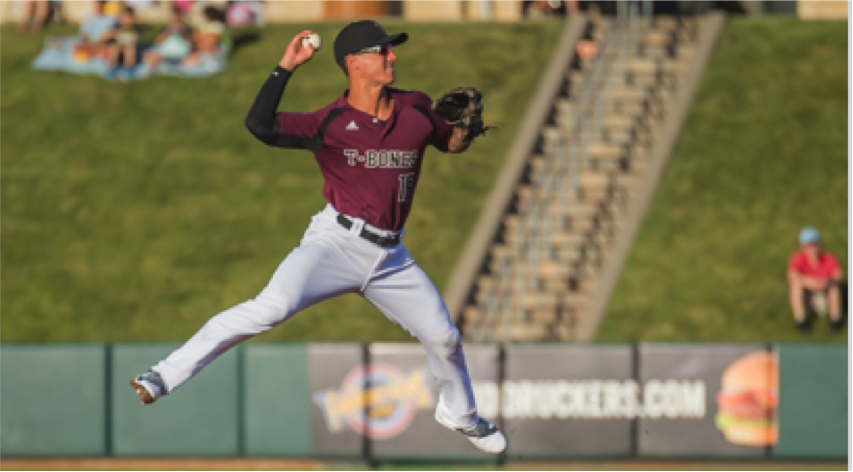 When he was signed by the Kansas City T-Bones a week into the 2017 American Association season, infielder Zach Walters joined an already long list of former Major Leaguers to suit up for an American Association team. However, Walters’ stay in independent baseball has turned out to be a short one. His contract has been sold to the crosstown Kansas City Royals, and he will report to the Class AA Northwest Arkansas Naturals. The Naturals open a road series with the Tulsa Drillers tonight at 7:05 p.m. Central time.

Walters was impressive during his 18-game stint with the T-Bones. He hit .347 (26-for-75) with five doubles, six home runs and 20 RBI. Walters hit safely in 16 of his games in a Kansas City uniform, including a 12-game streak to cap his brief American Association career. Arguably, Walters’ best game came on May 30 at the Gary SouthShore RailCats. He went 4-for-5 with a double and a run scored as Kansas City rolled 11-0 over the host RailCats.

The Cheyenne, Wyo. native made his Major League debut on September 6, 2013 with the Nationals, his second professional organization after being traded from the Arizona Diamondbacks in July of 2011. Walters was 3-for-8 in a limited role in September 2013, collecting a triple in the Nationals’ season finale, which, coincidentally enough, was played at the Diamondbacks.

In 2014, Walters had two stints with the Nationals, including an extended stay from mid-April through mid-May. He would return to Washington for five games in July. Then, for the second time in his career, Walters was traded at the Major League trade deadline, this time to the Cleveland Indians. Walters debuted in Cleveland on August 10, and remained on the Indians’ active roster until the end of the season. In total, Walters played in 62 Major League games in 2014, collecting three doubles, 10 home runs and 17 RBI.

He would go on to limited action in the Major Leagues in 2015 and 2016. In 2015, Walters played 12 games with the Indians, driving in three runs. He then went hitless over three games with the Los Angeles Dodgers in 2016.

Most recently, Walters was on the roster of the Class AAA Louisville Bats, a Cincinnati Reds affiliate, to begin the 2017 season. He notched eight hits in 11 games prior to being released.

Walters was originally a ninth round draft choice of the Arizona Diamondbacks in 2010 out of the University of San Diego.

The T-Bones conclude a road series at the Wichita Wingnuts on Thursday night at 7:05 p.m. Central time. The game can be seen live and for free at www.americanassociationbaseball.tv.