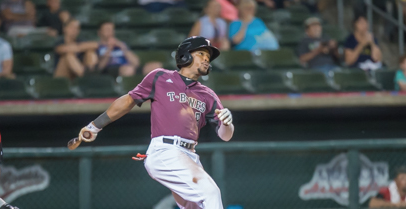 DURHAM, N.C.- The official statistician of the American Association, Pointstreak, has announced that Kansas City T-Bones OF Cedric Hunter (pictured) has been named the league’s Rawlings Player of the Month for the month of August.

Hunter hit .369 (45-for-122) in August, amassing eight doubles, seven home runs, 18 RBI and 26 runs scored. The defending Pointstreak Player of the Week in the American Association, he is currently riding a 12-game hit streak. Hunter hit safely in 25 of the 31 games he played in August, helping keep the T-Bones in the thick of the playoff hunt entering the season’s final weekend.

The Decatur, Ga. native began August with a bang, as he was 5-for-6 with two RBI in a 7-4 win over the Cleburne Railroaders on the road on August 1. The very next night, Hunter recorded a 3-for-5 game with a double and his first home run of the month, scoring three runs in an 8-3 win over Cleburne. Hunter homered again on August 5, a solo blast at the Lincoln Saltdogs. He homered in consecutive games on August 9 and 10, hitting a solo shot in a 4-3 win at the Fargo-Moorhead RedHawks on the 9th, and another in a 7-2 home win against the Salina Stockade the following evening.

His current hit streak began on August 19 at home against the Gary SouthShore RailCats, when he singled in a 3-2 win. The fourth game of the streak turned out to be one of Hunter’s most impressive performances of 2017, when he was 3-for-4 with a home run, four RBI and two runs scored as the T-Bones won 9-4 over Cleburne. Hunter launched a solo homer on August 25, helping the T-Bones to an 8-0 road win over the Gary SouthShore RailCats. After two-hit and three-hit games against the RailCats in the remaining games of the series, Hunter reeled off a pair of four-hit games in this week’s series against the Sioux City Explorers. In a narrow 6-5 loss on Monday, he was 4-for-5 with his most recent home run, and also collected four hits (two of them doubles) in an 8-2 win on Wednesday.

On the season, Hunter is hitting .359 with nine doubles, eight home runs, and 24 RBI. Before this week, he was previously named the American Association Pointstreak Player of the Week for the week ending July 30, a mere week and a half after signing with Kansas City.

The T-Bones, who are one game out of the American Association Wild Card, will open a season-ending home series with the St. Paul Saints tonight at 7:05 p.m. Central time at CommunityAmerica Ballpark in Kansas City. The series can be seen live and for free at www.americanassociationbaseball.tv.