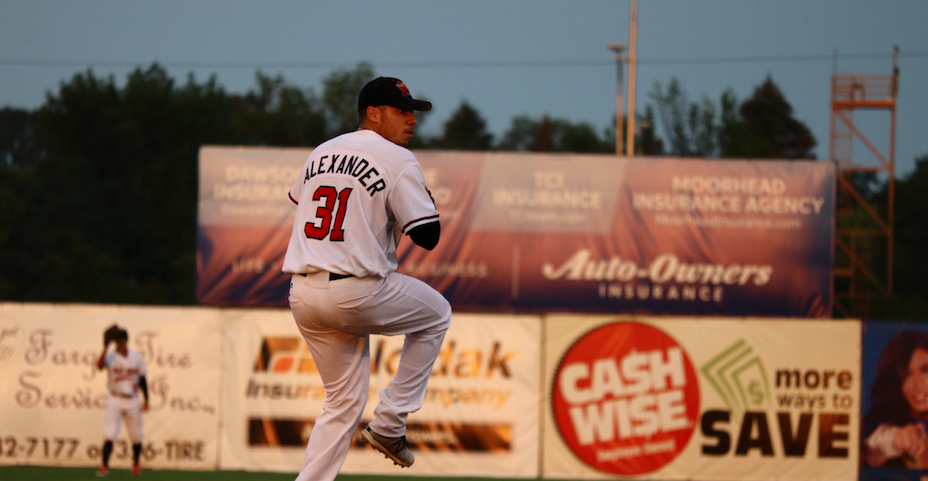 DURHAM, N.C.- The official statistician of the American Association, Pointstreak, has announced that Fargo-Moorhead RedHawks LHP Tyler Alexander (pictured) has been named the league’s Rawlings Pitcher of the Month for the month of August.

Alexander, the defending Pointstreak Pitcher of the Week, made six dominant starts in August. He logged at least seven innings in each outing, and was 4-1 over the course of the month. In 45 innings, Alexander allowed only three earned runs, and racked up a whopping 68 strikeouts. Each start in August saw Alexander reach the double-digit strikeout plateau.

His first start of the month came on August 3 at the St. Paul Saints. Over seven innings, Alexander allowed two runs (one earned) on five hits, walking only two and striking out 10. He earned the win in a 6-2 Fargo-Moorhead triumph. The Brandon, Fla. resident returned to the mound on August 8 to take on the Kansas City T-Bones at home. Alexander tossed a complete-game shutout, allowing only one hit and two walks, and striking out 13 T-Bones in a 5-0 win. His lone loss of August came on the 13th at home against the Gary SouthShore RailCats. Alexander tossed eight innings in the game, surrendering three runs (two earned) on five hits and a walk. Even though he took the loss, Alexander struck out 12 RailCats.

He bounced back from the loss to turn in three dominant performances to close the month. On August 18, Alexander tossed seven shutout frames against the Winnipeg Goldeyes. He worked around five hits and three walks, and struck out 10 Goldeyes in a 1-0 home victory. Alexander’s second 13-strikeout game of the month followed. In an August 23 road start at the Sioux Falls Canaries, Alexander threw seven more shutout frames, wiggling around three hits and two walks, and fanning 13 Canaries. Alexander took a no-decision in a 7-3 Fargo-Moorhead win. His final start of August came on the 28th at home against the Lincoln Saltdogs, when he threw seven more shutout innings, working around four hits. Alexander did not walk a batter and struck out 10 in a 7-0 Fargo-Moorhead win. He earned a complete game for the effort, as the game was part of a doubleheader.

On the season, Alexander is 7-6 with a miniscule 2.12 ERA, a figure that leads the American Association. He has worked 139.2 innings in his 20 starts, racking up a league-high 159 strikeouts.

2017 marks Alexander’s third season with Fargo-Moorhead. He went 5-5 with a 3.31 ERA in 2015, and followed that up with a 2016 season in which he was 12-5 with a 4.02 ERA. Alexander was named to the North All-Star team for the 2016 American Association All-Star Game. He attended Florida International University, from where he was picked by the Milwaukee Brewers in 27th round of the 2013 Major League Baseball Draft. He spent two seasons in the Brewers system before joining the RedHawks. He topped out at the Class A level, appearing in 20 games with the Wisconsin Timber Rattlers of the Midwest League in 2014.

The RedHawks, who currently hold a one-game edge for the American Association wild card, will open a season-ending road series at the Winnipeg Goldeyes on Friday at 7:00 p.m. Central time. The series from Shaw Park can be seen live and for free at www.americanassociationbaseball.tv.