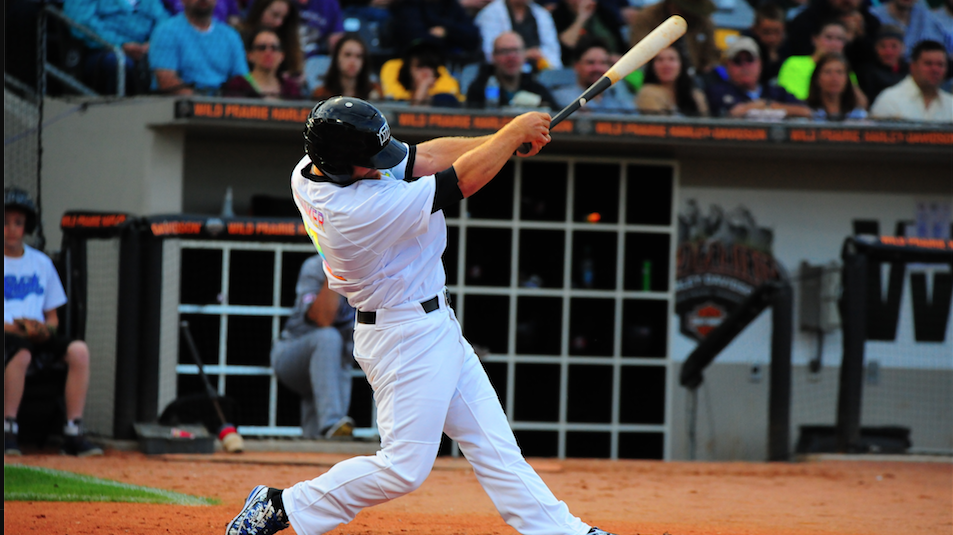 DURHAM, N.C.- The official statistician of the American Association, Pointstreak, has announced that St. Paul Saints 1B Brady Shoemaker (pictured) has been named the league’s Rawlings Player of the Month for the month of June.

The first of those multi-hit games was on June 7, when Shoemaker was 2-for-3 with an RBI and a run scored in a 10-0 win over the Texas AirHogs on the road. The Brazil, Ind. native began an eight-game hit streak on June 9, and the seventh game of the stretch, June 18 at the Winnipeg Goldeyes, saw him go 2-for-4 with two doubles. He drove in a run in a 7-6 St. Paul win. Both of Shoemaker’s hits in a 4-1 win at the Sioux Falls Canaries on June 21 went for extra bases, a double and a home run.

Just two days later, facing the Winnipeg Goldyes at home, Shoemaker finished with a bizarre line of 2-for-2 with a home run and four runs scored in a 13-7 win. He followed that up with a two-homer game on June 25 against the Goldeyes. Shoemaker drove in two runs and scored twice in a 5-4 win.

Shoemaker’s two best games of the month occurred back-to-back on June 28 and 29 against the Sioux City Explorers. On the 28th, Shoemaker was 3-for-4 with a home run and two RBI in an 8-5 loss. The next day, Shoemaker turned in another 3-for-4 line, hitting a double and scoring a run as the Saints won 6-3.

He is now hitting .324 on the season, with nine doubles, 10 home runs and 25 RBI. His 10 homers rank him tied for third in the American Association.

2017 is Shoemaker’s first season with the Saints. He spent 2009-2016 in affiliated baseball, playing in the Miami Marlins and Chicago White Sox systems, and reaching as high as the Class AAA level.

The Saints continue a home series with the Gary SouthShore RailCats tonight at 7:05 p.m. Central time. The series can be seen live and for free at www.americanassociationbaseball.tv.