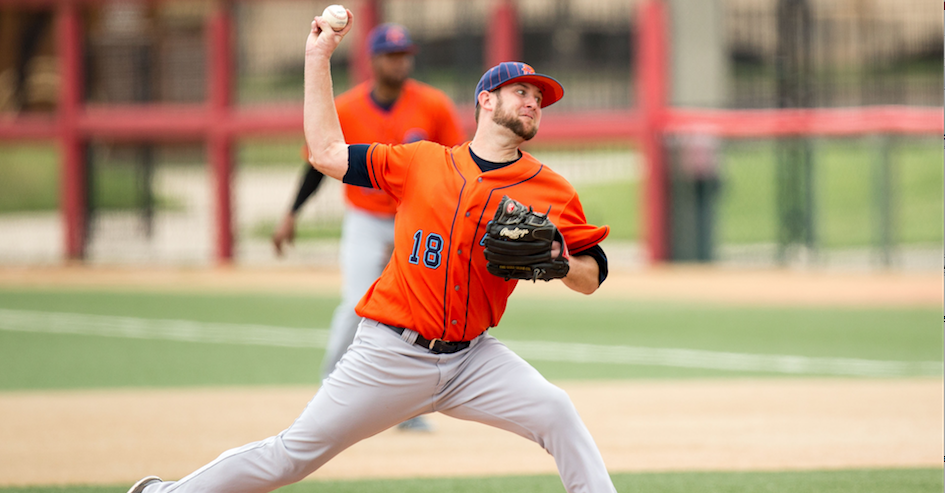 DURHAM, N.C.- The official statistician of the American Association, Pointstreak, has announced that Cleburne Railroaders RHP Patrick Mincey (pictured) has been named the league’s Rawlings Pitcher of the Month for the month of June.

Mincey made five starts in June, and went 3-1 in the month. He struck out 13 in his starts.

The Hartsville, S.C. native took the hill for the first time in June on June 4 at home against the Texas AirHogs. He was dominant over six innings, allowing one run on two hits without walking a batter. Mincey struck out four in a 4-1 Cleburne win. He returned to the mound on the road on June 10 face the Sioux Falls Canaries in South Dakota. Allowing three runs in 5.2 innings, Mincey took a no-decision as the Railroaders won 5-3.

Mincey’s two best starts of the month came on June 15 and 20, when he tossed back-to-back complete games. On the 15th, Mincey allowed one run on seven hits and one walk at home to the Salina Stockade. He struck out six Stockade hitters over the nine hitters, helping Cleburne to an 8-1 win.

He faced the Texas AirHogs once again on June 20, this time on the road in Grand Prairie, Tex. Once again, Mincey allowed just one run on seven hits, striking out one and did not walk a batter. Cleburne won 9-1.

His final start of the month occurred on June 25 at the Wichita Wingnuts, and turned out to be Mincey’s lone loss of the month. He allowed three runs on six hits over six innings as Wichita won 3-1.

2017 is Mincey’s fourth season in the American Association. He spent 2013 with the Grand Prairie AirHogs, split 2014 between the Wichita Wingnuts and Kansas City T-Bones, and returned to the league for 2016, splitting the year between the Fargo-Moorhead RedHawks and Joplin Blasters.

The Railroaders continue a home series with the Wichita Wingnuts tonight at 7:06 p.m. Central time. The game can be seen live and for free at www.americanassociationbaseball.tv.