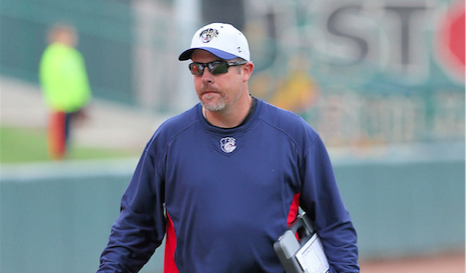 The man at the helm of Lincoln’s resurgence is second-year manager Bobby Brown (pictured), who has been recognized as the 2017 American Association Manager of the Year. The award was a result of voting from Brown’s peers and league teams’ media relations personnel.

Brown is in his second season leading the Saltdogs. In 2016, he guided Lincoln to a 52-48 mark, only the Saltdogs’ second winning season in a five-year span. The 52 wins marked an 18-game improvement from 2015.

Prior to his hiring in Lincoln, Brown spent three seasons in the dugout of the American Association’s Amarillo franchise, known as the Sox (2013-14) and Thunderheads (2015). His first season in Amarillo resulted in a winning record at 52-48. His first managerial experience came in 2010 in the Continental League, when Brown led Las Cruces to a 32-15 record.

Brown’s playing career spanned 10 seasons, from 1996-2005. He appeared in 14 games in 1997 with the Spokane Indians, the Kansas City Royals’ Short Season Class A Northwest League affiliate. Later, he played with current American Association member clubs — the Winnipeg Goldeyes in 2001 and 2002, and the Sioux City Explorers in 2004 and 2005.

Brown is a native of Van Nuys, Calif., and played collegiately at the University of Oklahoma. He was the starting left fielder for Oklahoma’s 1995 College World Series team.

The American Association Player of the Year will be announced on Monday at 10:00 a.m. Central time.