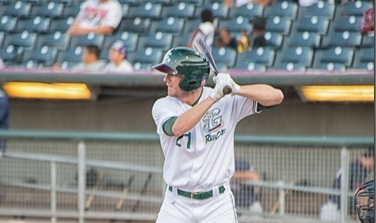 DURHAM, N.C.- The Gary SouthShore RailCats are in the thick of the American Association wild card hunt, and a young local player is a major reason why. OF Colin Willis, a product of Purdue University North Central, has been named the American Association’s 2017 Rookie of the Year. The award was voted upon by the league’s field managers and media representatives.

Heading into Sunday’s 6:10 p.m. Central time home game with the Lincoln Saltdogs, Willis is leading the RailCats with a .316 batting average. He has racked up 15 doubles, five triples, eight home runs, and 49 RBI.

Willis has racked up a number of big games this season for the RailCats. Early in the season on May 23, Willis was 3-for-5 at the Kansas City T-Bones. He picked up a double, a triple, four RBI and three runs scored in a 10-7 Gary SouthShore win. The very next night, Willis was 3-for-6 as Gary SouthShore squeaked past Kansas City 3-2. On June 4 at the Sioux City Explorers, Willis was 2-for-3 with his first home run of the season, part of a three-RBI night in an 8-1 win. Willis opened July with a 3-for-5 game on July 1 at the St. Paul Saints, hitting two doubles in a 4-3 win.

Two of Willis’ biggest run-producing games came consecutively in mid-July. On July 16, He was 2-for-4 with three RBI in a 9-4 home win over the Salina Stockade. Two days later, in a series opener at the Cleburne Railroaders, Willis was 3-for-5 with a double, home run and four RBI, carrying Gary SouthShore to a 5-4 win. He notched two more three-hit games in August, when he was 3-for-5 against the Winnipeg Goldeyes on August 5, and 3-for-4 against the Sioux Falls Canaries on August 17.

After a collegiate career at Purdue University North Central (now Purdue University Northwest), Willis made his professional debut in 2016, playing in 11 games for the RailCats. He hit .231 (9-for-39) in the limited stint, hitting two doubles, a triple, and five RBI. Willis is a member of the Purdue Northwest Athletic Hall of Fame. He holds the single-season school record in hits (93), runs (65), steals (28), and triples (8). Willis was a three-time all-conference selection, including a senior season in which he hit .364 with five home runs and 23 RBI.

The RailCats’ game with the Saltdogs tonight can be seen at www.americanassociationbaseball.tv.