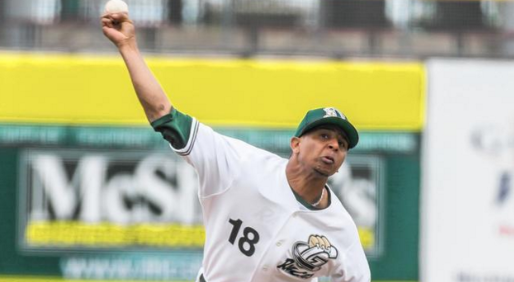 DURHAM, NC- The official statistician of the American Association, Pointstreak, has announced that Gary SouthShore RailCats’ RHP Charle Rosario (pictured) has been named this week’s Pointstreak Pitcher of the Week for the week ending June 19th.

Rosario went 2-0 this week to improve to 5-1 with a 2.58 ERA. On June 14, Rosario helped lead the RailCats to an 11-4 victory at Sioux Falls tossing five innings, allowing only three earned runs. A few days later, Rosario hurled a complete game shutout, striking out eight batters in a 3-0 win at Lincoln.

The Simpsonville, SC native spent his professional career playing in the Boston Red Sox organization from 2007-2012. In 2011, Rosario reached the AA level where he played for the Portland Sea Dogs. This year marks his second year with the Gary SouthShore RailCats. Last season, the right-hander went 12-8, posting a 3.81 ERA while striking out 89 batters in 137 innings.