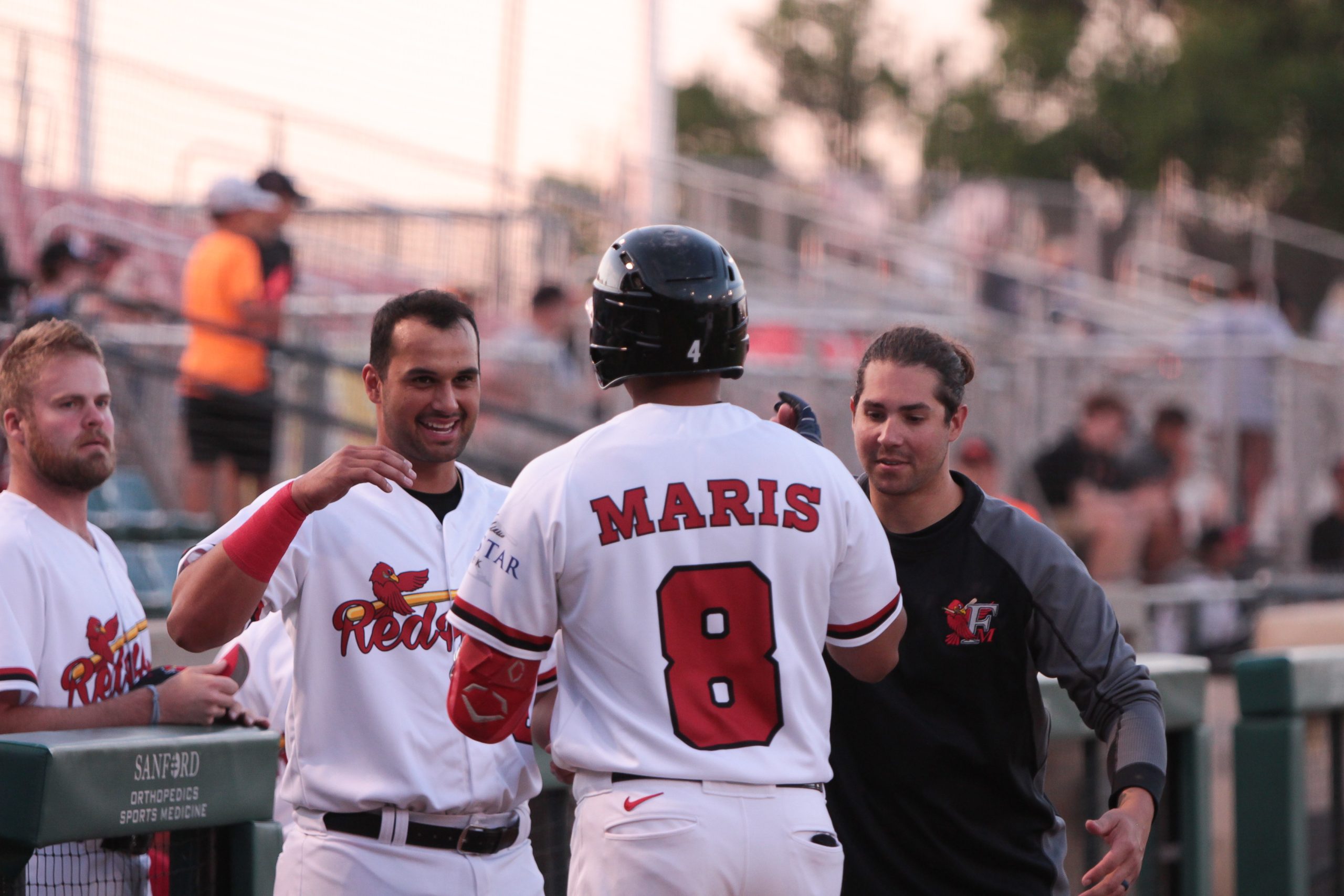 The Cleburne Railroaders (6-22) struggle to seal the deal against the Fargo-Moorhead RedHawks (19-9) in the first game of their road trip. A tight game all the way through was marked by strong pitching and stellar resiliency with each team recording only single digit hits.

More to come in this match-up on the Facebook Game of the Week this week.

Sioux City scored in the first inning when RF Trey Martin hit a sacrifice fly to center to score CF Chase Harris. Kansas City responded in the second when 1B Casey Gillaspie drove in RF Jan Herandez to tie the game 1-1. The tie didn’t last long as C John Anthon hit a three-run home run in the second. Sioux City brought one run across in the third and fifth inning and after five innings of baseball led 6-1.

The Monarchs offense started to show some life late in the game. In the sixth inning, Hernandez singled to left field to score 2B Darnell Sweeney. C J.C. Escarra hit a two-run home run in the seventh and all of a sudden the Monarchs trailed by two, 6-4. Sioux City’s relief pitchers Brandon Brosher and Thomas McIlraith each threw a scoreless inning to close out the Monarchs.

Starting pitcher Kevin McCanna earned the win for the Explorers. He kept the dangerous Kansas City offense in check, striking out seven hitters and allowing two runs through six innings.

Aside from a three run inning in the 4th, the Chicago Dogs (17-11) were held scoreless and were subsequently defeated by the Milwaukee Milkmen (16-12) at Franklin Field.

A smoldering hot 100°F at first pitch, the game got going slowly until the bottom of the 3rd on a 1B Correlle Prime RBI single.

The top of the 4th welcomed a SS Connor Kopach 2-run HR for the Chicago Dogs and five total runs from the Milwaukee Milkmen. CF Aaron Hill and 2B Bryan Torres had an RBI single and double respectively and Torres later scored on an error causing a pitching change. The Milkmen went on to score five more runs against radio silence from the Dogs bats.

Kane County opened the scoring in the top of the second when Jimmy Kerrigan led off with a home run to centre field. Josh Rolette followed with a double to left-center and later scored on a two-out wild pitch.

Winnipeg rallied for three runs in the third to take the lead.  Deon Stafford Jr. doubled to right-centre leading off and took third on a single to left from Raul Navarro.  Two batters later, Ian Sagdal ripped a double to right-centre that scored Stafford and Navarro with the tying runs.  Max Murphy made it 3-2 Goldeyes with a double down the right field line that scored Sagdal.  It was Murphy’s 400th career RBI.

The Cougars retook the lead in the fourth.  Ernie de la Trinidad tripled to right-centre with one out and scored the tying run on a Sherman Johnson groundball single to center.  After Cornelius Randolph doubled, Kerrigan was intentionally walked to load the bases.  Kane County went in front 4-3 on a sacrifice fly to centre by Rolette, and added a fifth run on a two-out, RBI single to centre from Nick Anderson.

Johnson lifted a sacrifice fly to centre in the sixth that made it 6-3, and the Cougars broke the game open two batters later on a two-out, three-run homer to left-centre from Kerrigan.

De la Trinidad singled home the Cougars’ 10th run with two outs in the top of the ninth.

Ryan Tapani (4-2) started for Kane County and picked up the win, allowing three earned runs on seven hits in seven innings.  Tapani walked none and struck out eight.

Lake Country got to work early, especially on the base paths. In the first inning, the DockHounds stole second and third to put two runners in scoring position. 1B Gio Brusa scored 3B T.J. Bennett off a 1-6-3 putout for out number two of the inning. In the second, 2B Tristen Carranza got on base with a double. RF Lamar Briggs quickly brought him home to make the score 2-0 DockHounds.

It didn’t take long for the Saltdogs to respond. In the second inning, LF Justin Byrd hit a solo shot while SS JR DiSarcina hit a two-run bomb, giving the Saltdogs a 3-2 lead. Lincoln didn’t stop there as they scored three more runs in the fourth to go up 6-2.

In the top of the sixth, Lake Country inched closer to Lincoln as DH Aaron Takacs notched an RBI double to score Brusa. In the ninth inning, The DockHounds attempted to rally. LF Jake Snider drove in C Wilfredo Gimenez on a single to center field. SS Gabriel Noriega had a huge opportunity to drive in two runners that were in scoring position, but he struck out swinging to end the ball game as thE Saltdogs won 6-4.

Groovy Tune-day at The Birdcage ended up being Groovy Gary Wins Day as the Gary Southshore Railcats (14-16) came out of their first game in Sioux Falls defeating the Sioux Falls Canaries (8-21) in nine innings.

The Canaries started out HOT! SS Osvaldo Martinez opened the door with an RBI followed by a DH Jabari Henry RBI Single.

Later in the first three runs scored for the Canaries on a 1B Trey Michalczewski home run.

The bats remained silent for the Canaries the rest of the game while the Railcats went to work.

Led by C Michael Cruz’s 3-hit and 2-run performance, the Railcats pounded their way to a victory with the support of a SS Daniel Lingua HR in the 7th.