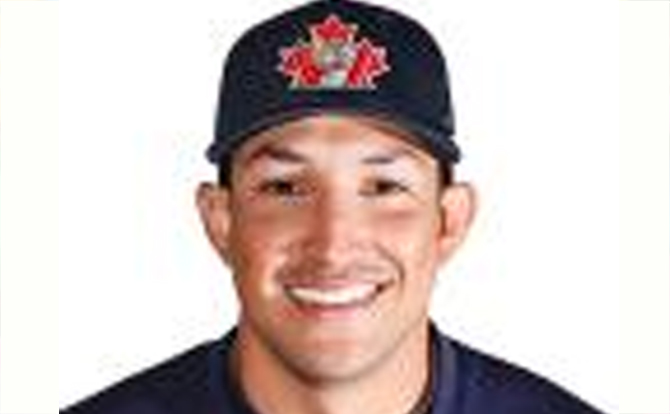 A three-run sixth inning helped the Winnipeg Goldeyes beat the Laredo Lemurs 4-3 in a battle of division leaders. RF Ryan Scoma tied the game at three with a two-run double and scored the eventual game-winning run on 3B Amos Ramon’s (pictured) RBI single. Goldeyes’ LHP Mark Hardy allowed just two earned runs in 7.1 innings of work to earn the win. Hardy allowed seven hits and one walk while striking out six. RHP Mark Serrano pitched all eight innings for the Lemurs, allowing three earned runs and striking out two in the loss. Laredo DH John Allen drove in two runs with a single to center field in the first inning to give the Lemurs an early 2-0 lead. Lemurs’ SS Jimmy Mojica scored on a passed ball in the third before the Goldeyes scored four unanswered to win.

In a completion of a game suspended due to rain on Monday, the Lincoln Saltdogs came from behind to beat the El Paso Diablos 4-3. El Paso led 1-0 in the bottom of the fourth on Monday when play was suspended. The lead would change hands several times Tuesday before Saltdogs’ 2B David Espinosa sent a 1-0 offering off the scoreboard in the eighth to give Lincoln a 4-3 lead. Closer RJ Rodriguez shut the door on the Diablos in the ninth, recording two strikeouts for his fifth save. Relief pitcher PJ Zocchi earned his first win of the season after throwing a scoreless eighth. Lincoln 2B Dennis Raben drove in two runs for the Saltdogs with an RBI single in the fourth and a solo home run in the sixth. Diablos’ 1B Jonathan Cisneros launched a sixth-inning, two-run homer in the loss.

El Paso RF Brian Joynt recorded four hits and drove in four runs for the Diablos in a 7-6 win against the Lincoln Saltdogs. El Paso was one step ahead of the Saltdogs throughout the game, adding timely insurance runs to take Tuesday’s second game. Six El Paso batters had multi-hit games, including Diablos’ SS Maikol Gonzalez, who had three hits and a walk in the leadoff spot and scored three times. LHP Adam Tollefson earned the win for the Diablos, pitching two scoreless innings in relief. Lincoln’s Dan Carroll and Mike Provencher both drove in two runs in the loss.

Trois-Rivieres RHP Charlie Weatherby pitched the Aigles to a 10-1 interleague win against St. Paul, throwing eight innings of one-run ball. Weatherby allowed just six hits and issued two walks while striking out six. The Aigles gave Weatherby plenty of room for error by surging to a 7-0 lead after three innings. In the first, Aigles’ LF Jon Smith kicked off a two-out rally with a double, and the next four batters rallied to give the Aigles an early 4-0 lead. Trois-Rivieres tacked on three more runs in the third to put the game out of reach. Five Aigles recorded two hits and 1B Brett Flowers led the way for Trois-Rivieres with three RBI. St. Paul’s lone run came on a fourth-inning, solo home run from DH Craig Brazell — his first of the season.

A third-inning two-run double from Explorers’ DH Palmer Karr proved to be enough to beat the Gary SouthShore RailCats in a rain-shortened, seven-inning game. Karr’s double gave Sioux City a 5-4 lead and CF Eliezer Mesa scored in the seventh on a double play to seal the 6-4 win. Explorers’ 3B Bryan Pounds was 2-for-4 with two RBI in the game. Sioux City RHP Preston Olson and Gary SouthShore RHP Will Krout each allowed three runs in the first inning before settling in. Olson earned the win, allowing four runs in five innings and striking out two. Krout pitched all 7.1 innings for the RailCats, allowing five earned runs and striking out two, before the rain abruptly handed him a loss.

Wichita scored three runs in the first inning and never let up offensively in a 10-4 win against the Amarillo Sox. Wingnuts’ LF Derek Perren drove in a game-high three runs and RHP Christopher Smith picked up the win, his second of the season, allowing two earned runs in 6.2 innings. The Sox cut Wichita’s lead to 5-4 in the top of the sixth on a Chris Grossman solo home run, but the Wingnuts answered in the bottom frame, scoring two runs to make it 7-4. Wichita 2B Jake Kahaulelio was 2-for-4 with two runs, two RBI and a solo home run. The Wingnuts also stole three bases in the game, including two from RF David Amberson.