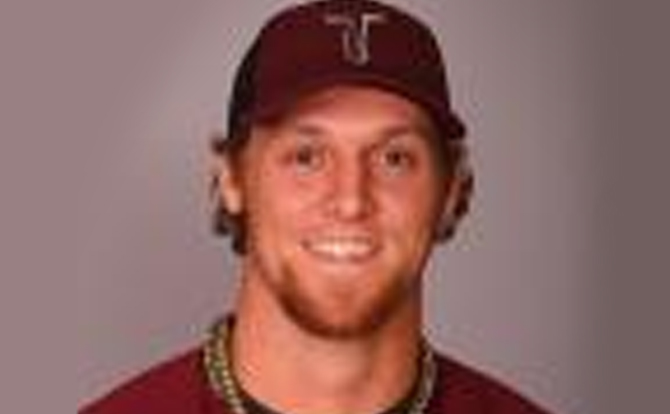 Grand Prairie made one incredible comeback and almost made a second, but Kansas City narrowly escaped with a 9-8 victory in 10 innings. The AirHogs erased a six-run deficit in the bottom of the ninth and came dangerously close to coming back again in the tenth. But, T-Bones RHP Ethan Cole (pictured) came in from the bullpen with the bases loaded and got a game-ending double play to nail down the win with the tying and winning runs in scoring position.

Though they ultimately came up short, the AirHogs’ ninth-inning rally was arguably the most improbable comeback of the young 2013 season. Grand Prairie trailed 7-1 going into the bottom of the ninth, when they came back to knot the score on three hits and four walks. With the game tied 7-7, it looked like Grand Prairie had taken the momentum. But, Kansas City answered right back. The T-Bones got a big, go-ahead double off the bat of CF Kennard Jones to retake the lead in the top of the tenth and added an insurance run on an RBI single by C Trevor Coleman.

Down once again, the AirHogs fought back. LF Aaron King and RF Kenny Held led off the bottom of the tenth with back-to-back doubles, cutting the deficit to one run. After a fly out produced the first out of the inning, a pair of Grand Prairie singles loaded the bases. With the tying run on third and the winning run on first, the T-Bones went to the bullpen and called on Cole to clean up the mess. The reliever did just that, inducing a double play and thwarting another AirHogs comeback.

A five-run 11th inning for the Lemurs ended a high-scoring affair in Winnipeg, as Laredo beat the Goldeyes, 13-8. The clubs had been tied since an eighth-inning home run by Goldeyes CF Fehlandt Lentini before the Lemurs broke through to capture the win. Laredo began the 11th by loading the bases with nobody out. After a force out at the plate, LF Marcos Rodriguez gave the Lemurs the lead with a sacrifice fly to center field. Winnipeg had a chance to hold Laredo there with two outs, but the Lemurs were not finished. Laredo SS Jimmy Mojica singled in a run and CF Sawyer Carroll followed up with a three-run home run to put the game out of reach. The Goldeyes loaded the bases in the bottom half of the inning, but did not score a run and left the tying run waiting on deck.