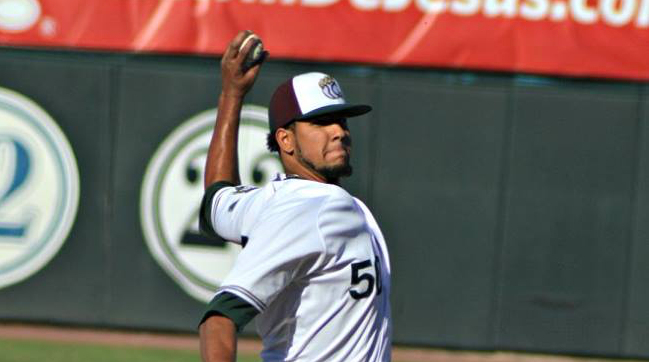 DURHAM, N.C.- One of the brightest spots in the bullpen for the Gary SouthShore RailCats in 2017 is headed to affiliated baseball. LHP Carlos Diaz’s contract has been purchased by the Miami Marlins, who are expected to assign the southpaw to one of their three Class A affiliates — short-season Class A Batavia (N.Y.) Muckdogs, Class A Greensboro (N.C.) Grasshoppers, or Class A Advanced Jupiter (Fla.) Hammerheads.

Twice in 2017, Diaz struck out six opposing hitters. He achieved the feat on June 6 in a relief role against the Fargo-Moorhead RedHawks, when he threw four innings in a 4-3 Gary SouthShore win. Diaz struck out six more hitters on June 14 in a five-inning start at the Sioux Falls Canaries.

Diaz earned wins in relief on June 29 and July 19. Facing the Winnipeg Goldeyes on the road on June 29, Diaz tossed two innings, striking out five of the seven hitters he faced. The RailCats edged the Goldeyes 8-7. Diaz’s second win, in a game that began on July 19 and was completed on July 20, came against the Cleburne Railroaders. In the game, he allowed just one hit over three innings, allowing Gary SouthShore to win 7-6 in 14 innings.

The Marlins will be Diaz’s second Major League organization. The La Vega, Dominican Republic native pitched in 12 games, making 11 starts, in 2012 with the Dominican Summer League Indians. He struck out 49 in 51 innings. Cleveland promoted Diaz to the Arizona League Indians in 2013, where he struck out 15 in 13 innings.

Diaz also made four starts with the Pecos League’s Tucson Saguaros in 2016, going 2-0.

Gary SouthShore will open a home series with the St. Paul Saints tonight at 7:10 p.m. Central time at the U.S. Steel Yard. The series can be seen live and for free at www.americanassociationbaseball.tv.