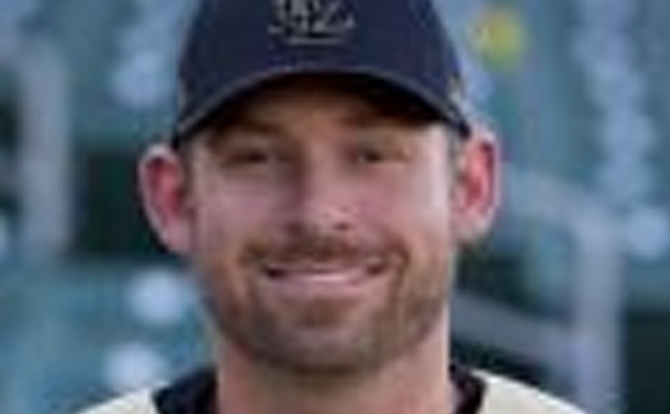 Laredo remains undefeated on the season after their combination of solid defense and strong batting helped them notch a huge 11-1 win against Fargo-Moorhead. The Lemurs scored six runs in the first inning and never looked back. C Brian Peterson (pictured) had a great day at bat, going 4-of-5 with three runs to lead the Lemurs to their big victory. 1B Mike Sheridan and LF Marcos Rodriguez also made big contributions with two runs each.

LHP Greg Wilborn gave up seven hits in 4.1 innings, but still has yet to allow a run this season in the two games he has pitched for Laredo. Wilborn’s 0.0 ERA leads the league.

Amongst the slew of runs from Laredo, the RedHawks managed to get on the board in the seventh inning when a sacrifice fly from DH Tim Alberts allowed 2B Jose Garcia to score.

The game was tightly contested the whole way through. After the T-Bones earned an early 2-1 lead in the first inning, the RailCats answered with a two-run double from LF Adam Klein in the fifth inning. The T-Bones then tied things up in the sixth after a three-run home run from 1B Matt Padgett.

But Kansas City’s struggles from the mound ultimately resulted in a loss. The RailCats had 10 hits and five runs against LHP Lucas Irvine in his 5.2 innings.

St. Paul’s batters were too much for El Paso in this one, earning the Saints an early lead and eventually securing their 11-3 victory. 2B Dan Kaczrowski’s three runs in his 3-of-4 performance and DH Brad Boyer’s four RBIs were key in helping the Saints overpower the Diablos.

Boyer’s home run in the third inning marked his first of the season. This is the fourth game this season in which he has recorded at least three RBIs for St. Paul.

A strong sixth inning gave the Diablos three runs, including an RBI double from LF Brian Joynt. But El Paso failed to put anything together in late innings to contest St. Paul’s lead.

A late New Jersey rally in the eighth inning, marked by an error in center field that allowed 2B Jose Cuevas, 3B Nick Giarraputo, and DH Yasanberty Arbelo to score, was not enough for a comeback in Wichita as the Wingnuts beat the Jackals 10-5.

New Jersey scored first in the second inning off of an RBI single from Cuevas. But DH John Rodriguez hit a two-run home run to give Wichita a 3-1 lead in the third, which the Jackals never came back from. Rodriguez was only 2-for-5 in the game, but he had 3 runs and 3 RBIs. Cuevas, who led the league in batting average prior to the game, was only 1-for-3 in the loss.

RHP Junior Guerra earned his second win this season for the Wingnuts, striking eight out and allowing just one run in his seven innings. Offensively, New Jersey struggled to get runs, leaving 10 men on base.

Winnipeg RHP Justin Garcia’s impressive performance on the mound, with 12 strikeouts in his 6.1 innings, led the Goldeyes to a 5-1 win against the Saltdogs. The victory marks Winnipeg’s eighth in a row as they remain undefeated.

Some of Winnipeg’s batters struggled in the game, but a two-run home run from RF Josh Mazzola in the first was enough to give the Goldeyes an early lead. Saltdogs DH Ian Gac tied the game with an RBI double in the bottom of the first. But an RBI single by Winnipeg 1B Casey Haerther in the third and a two-run triple from 3B Amos Ramon in the sixth gave the Goldeyes the runs they needed to pull off the win.

The Sox survived a ninth inning rally from Grand Prairie to notch a 10-7 win over the AirHogs. Amarillo’s five runs in the sixth and four runs in the eighth gave them a lead that Grand Prairie could not quite catch up to.

The Canaries’ team effort on offense and a solid pitching performance from RHP Kyle Ruwe held the Explorers to just two runs in a 7-2 win for Sioux Falls. Ruwe pitched eight innings, throwing seven strikeouts and finishing with a 1.76 ERA.

Home runs from 1B Jared Clark in the fifth and CF Nick Van Stratten in the seventh complemented Ruwe’s pitching performance and helped give Sioux Falls the edge.

In the loss, Explorers 3B Bryan Pounds batted well, going 3-of-4 with one run.