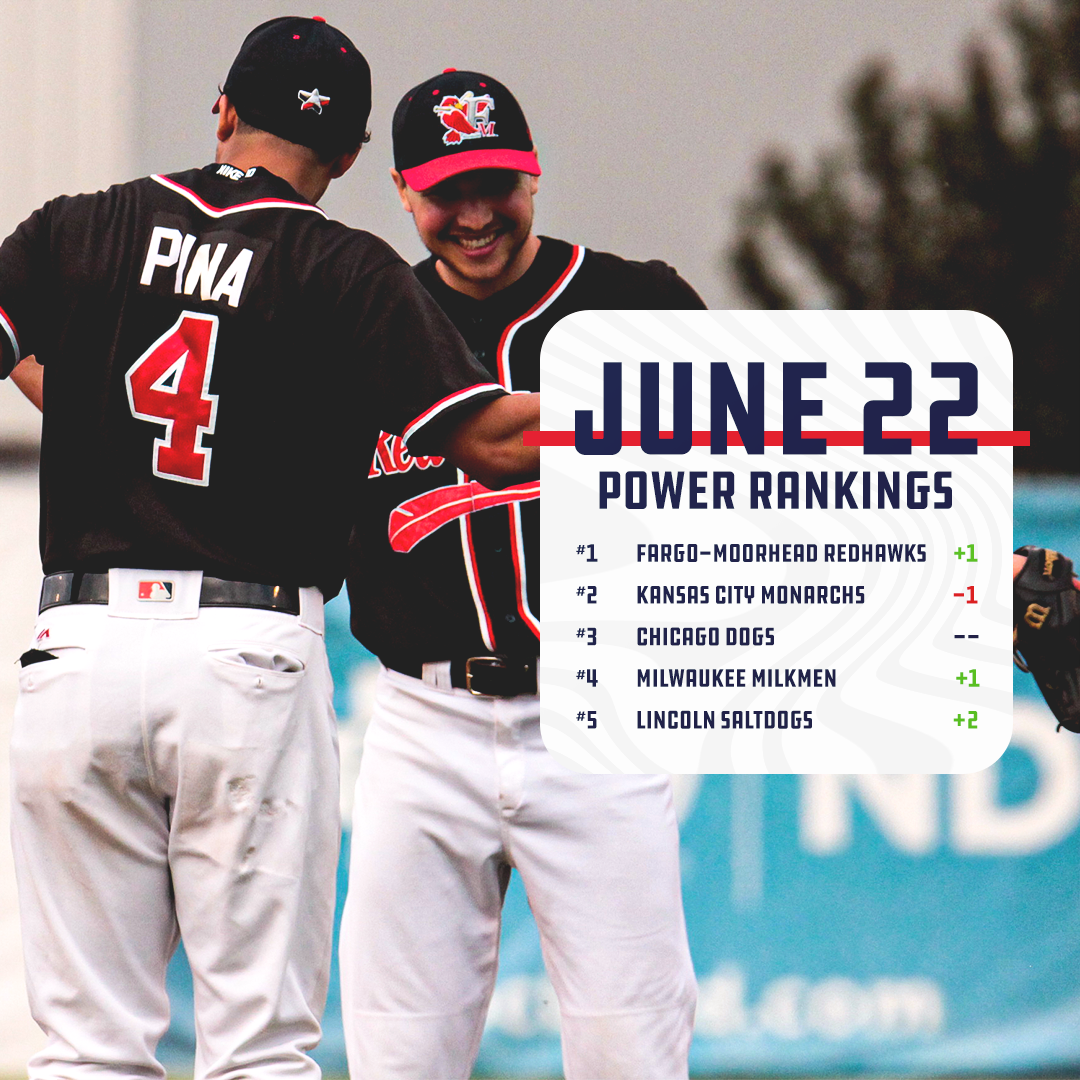 The RedHawks are doing it all right now. Third baseman Leo Piña earned Player of the Week honors on Monday. He continues to provide all-around production, hitting .586 over his last 10 games and continuing to excel in the field. On the mound, Sebastian Kessay lowered his season ERA to 2.82 and closer Alex DuBord has converted 10 saves with a 1.47 ERA. Plus, veteran Kevin McGovern made some AAPB history on Tuesday night, earning his league-record 56th win. That’s all added up to plenty of wins for the RedHawks: the team finished up a 7-2 homestand with a sweep of Cleburne on Thursday, then nabbed a series win against Gary SouthShore on the road before two wins in Lake Country.

Perhaps no one in the Association has had a more up-and-down week and a half than the Monarchs. Riding high after a three-game road sweep at Chicago June 10-12, Kansas City were swept in three tight games by a hungry Sioux City team. The Monarchs bounced back to take two of three from Milwaukee as they look to overtake the RedHawks in the West Division standings. Slugger Jan Hernandez leads the Association with 15 home runs, two clear of his next-closest competitors.

The Dogs were knocked down a couple of pegs after the sweep vs. Kansas City and losing two of three in Milwaukee in the following series. But Butch Hobson’s team doesn’t stay down for long. The Dogs raced to a 4-0 start to their homestand this week, including a 14-0 win over Lake Country on Sunday and a come-from-behind walk-off win over the Milkmen on Tuesday afternoon. Starter Jordan Kipper has picked right back where he left off in his return to Rosemont; he’s allowed just one run in 16 innings over four starts this season.

Losing Tuesday’s game on a walk-off walk will sting for Anthony Barone’s team, but they remain on the right track in a crowded East Division thanks to a midweek series win over Chicago. Catcher Dylan Kelly has been consistently great, hitting .397 on the season and .407 over his last six games. Starter Jose Espada threw six shutout frames against Chicago on June 16, lowering his ERA to 2.72 on the year.

Zach Keenan’s debut in a Saltdogs uniform as gone about as well as he could have hoped. The true rookie out of Middle Tennessee State earned Pitcher of the Week honors on Monday, fresh off of seven shutout innings in his second pro start at Winnipeg. Brett Jodie’s lineup has gotten a boost by a pair of players working their way back from injuries. Over the last week Justin Byrd is hitting .409 with a pair of home runs and Ryan Long is batting .364 with four longballs and a team-best 10 RBIs.