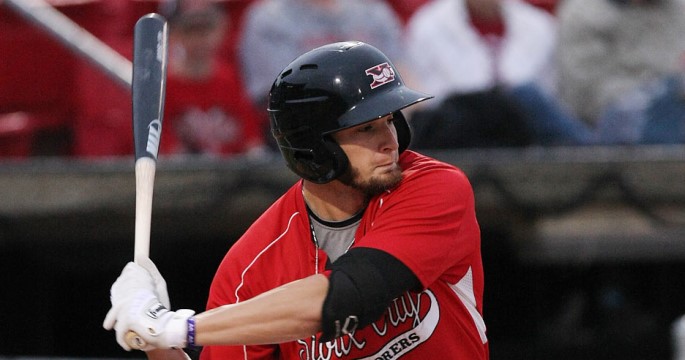 Trailing 2-1 with the bases loaded in the bottom of the eighth, the Explorers climbed back and took a two-run lead. DH Sam Judah (pictured) watched a wild pitch go by to score 1B Luke Murton and advance the runners, and then drove in the go-ahead runs with a two-RBI single. Murton led the Explorers with three hits, a run scored, an RBI and a stolen base.

The Goldeyes brought the tying run to the plate in the ninth, but Sioux City closer Chris Bodishbaugh got out of the jam for his ninth save. RHP Cody Satterwhite (2-0) picked up the win after pitching a scoreless eighth. Explorers’ starter Jason Jarvis pitched seven innings, allowing one earned run on six hits to keep Sioux City in the game. Goldeyes’ starter Justin Garcia wound up with a no-decision after striking out eight in six innings.

Grand Prairie took an early 4-1 lead against Sioux Falls and held on despite a few late home runs from the Canaries. DH Frazier Hall started Grand Prairie off with a first-inning RBI single and continued to rake in the fourth with an RBI double. RF Kenny Held followed Hall, scoring two on a single to left field. In the fifth, 1B Andres Rodriguez blasted a two-out home run to make it 5-1. Rodriguez led the AirHogs with three hits, and scored each time he reached base. Six AirHogs had multi-hit games in the win.

Sioux Falls DH Tim Pahuta slugged his second home run of the game — a two-run shot — in the bottom of the sixth, and RF Nate Baumann hit a solo home run in the seventh to get within two, but the five-run lead proved too much to overcome. AirHogs’ closer Patrick Mincey pitched a 1-2-3 ninth to earn his seventh save. Grand Prairie starter Derek Blacksher (3-4) pitched six innings of three-run ball, striking out four, to earn the win.

The Amarillo Sox scored four runs in the sixth inning and another four in the eighth to beat El Paso, 10-4. Trailing 3-2 in the sixth, the Sox loaded the bases, and C Chris Grossman drew a walk to bring in the tying run. The very next batter, CF Cory Patton, doubled to center field, driving in the go-ahead run. Grossman would score on a wild pitch later in the inning to give the Sox a 6-4 lead. Another Patton RBI double and home runs from LF David Peralta and DH Trey Ford highlighted Amarillo’s four-run eighth. Patton reached based in all four plate appearances, batting 3-for-3 with two doubles, a walk and a team-high three RBI. RHP Jason Johnson (3-1) had plenty of run support to work with in his seven innings of work. He allowed four runs on seven hits, walked three and struck out five.

The Wingnuts stormed out to a first-inning 5-0 lead, and built a 10-2 lead by the fourth inning to beat the Laredo Lemurs. Neither team would score after the fourth inning. After Wichita’s first two batters reached base, DH John Rodriguez cleared the bases with a three-run homer. Still in the first inning, the Wingnuts loaded the bases, and then scored on RF David Amberson’s walk and LF Jared McDonald’s fielder’s choice.

After 10 Wichita batters came to the plate in the first, nine more came to bat in the fourth. Amberson led off the inning with a solo home run, 1B CJ Ziegler belted a two-RBI double and CF Brett Clevlen drove in Ziegler with a single.

3B Brad Boyer snapped a 4-4 tie, driving in a run with a fielder’s choice in the fifth, and CF Jose Hernandez added an insurance run with an RBI single in the eighth to fuel a 6-4 Saints win. St. Paul led off the game with a four-run first-inning, when 1B Ole Sheldon singled with the bases loaded and an error scored all three base runners. Hernandez drove in Sheldon with an RBI single to give St. Paul an early 4-0 lead. Hernandez led the Saints in RBI with two and also stole a base. Lincoln tagged Saints starter Wes Roemer for four runs in the third, but Boyer’s RBI helped Roemer (4-4) pick up the win. Saints closer Matt Meyer pitched a scoreless ninth to earn his ninth save.