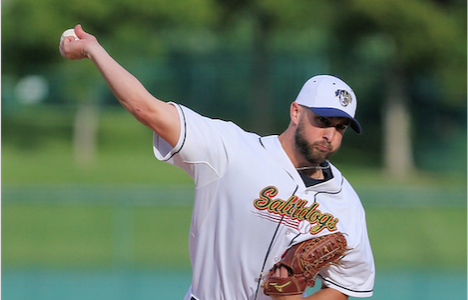 DURHAM, NC- The official statistician of the American Association, Pointstreak, has announced that Lincoln Saltdogs RHP Derek Gordon (pictured) has been named this week’s Pointstreak Pitcher of the Week for the week ending July 9.

Gordon made a pair of strong starts this week, helping the Saltdogs to two victories. He first started Monday at the Texas AirHogs, twirling eight shutout frames. He limited the AirHogs to just three hits and walked only two batters in his outing, striking out nine in the process. Gordon took a no-decision, though, as Lincoln needed extra innings to earn a 3-1 win.

He returned to the mound on Saturday to face the Cleburne Railroaders on the road, and held Cleburne to just one run on six hits over seven innings. Gordon walked two and struck out two, earning the win in a 7-1 Lincoln triumph.

2017 marks Gordon’s first season with Lincoln, but second in the American Association. He pitched in 2014 for the Kansas City T-Bones, making 14 appearances. From there, Gordon spent two seasons in the Kansas City Royals system, the same organization for which his brother, Alex, plays for at the Major League level. After posting a 2-3 record and 3.47 ERA for the Rookie-level Idaho Falls Chukars of the Pioneer League in 2015, Gordon was 2-2 with a 4.38 ERA in 2016 for the Class A Adavnced Wilmington (Del.) Blue Rocks of the Carolina League.

Lincoln opens a home series with the Salina Stockade on Tuesday at 6:45 p.m. Central time. The series can be seen live and for free at www.americanassociationbaseball.tv.