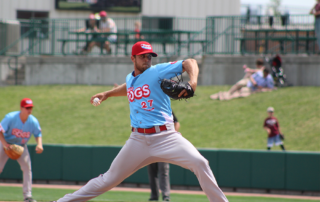 Two major league organizations shelled out a total of $48,000 Thursday to obtain a pair of right-handed pitchers who were in the American Association within the last two seasons.

Taylor Grover, who spent all of 2018 with the new Chicago Dogs before signing with Cincinnati after the season, had his contract picked up by Baltimore as the No. 1 selection in the Triple-A phase of the Rule 5 draft on the final day of baseball’s Winter Meetings in Las Vegas.  Sixteen selections later, Atlanta obtained Jason Creasy, a member of the St. Paul Saints‘ starting staff for two months of the 2017 season.  He was taken from the Arizona Diamondbacks system.

Each draftee in the Triple-A portion of the draft cost the selecting team $24,000, a figure that was only half that much one year ago.

Grover, who had gotten as high as Double-A in five seasons in the Boston farm system after the Red Sox had chosen him in the 10th round of the 2013 June amateur draft prior to joining the first-year Dogs, struck out 63 American Association batters in only 48 innings spread over 43 appearances for manager Butch Hobson’s team.  He saved 14 games, had a 1-2 record and a 2.63 earned run average.

Creasy had a similar path, spending six years with Pittsburgh after being drafted in the eighth round in 2011 and briefly reaching Triple-A.  He did not stand out with the Saints in 11 starts one year ago (4-5, 5.68) but gained more experience, then had a sparkling 1.96 ERA with 50 strikeouts in 36.2 frames with Southern Maryland of the Atlantic League this season (he also appeared briefly with Long Island in the same league) before pitching in Class A within the Arizona farm system late in the year.

No one with American Association experience was drafted in the major league portion of the proceedings where the price tag was $100,000 per player.

Odd as it may seem, Seattle Mariners caps may become a hot item in the Sioux City Explorers gift shop in the near future.

The Mariners were the latest team to dip directly into the deep Sioux City talent pool when they signed lefty Ian McKinney, a strikeout artist who fanned American Association hitters at the rate of 11.2 times every nine innings after joining the X’s in July (2-2, 3.18).  McKinney was the 17th Explorer to sign with a major league organization since 2015, with four of them joining the Mariners minor league system.

On top of that, Seattle signed free agent right-hander Tayler Scott mere days ago.  One of the few South Africans in professional baseball, Scott toiled in the Sioux City bullpen the first month of 2016 (1-0, 1.88 in 17 appearances).

Scott is high enough up the minor league ladder after pitching in Triple-A for the Texas Rangers the last month of  ’17 and all of last season that it does not take much imagination to see the 26-year-old getting an opportunity with the rebuilding Mariners as early as next season.  He got into five spring training games for the parent Rangers last year (one save, 4.50), then posted a 3.26 earned run average (5-5, one save) in 44 relief outings for the team’s top farm club in Round Rock, which is in the offensively strong and often high altitude of the Pacific Coast League.

Scott, who was signed by Milwaukee initially when he left Sioux City, is now in his fourth major league farm system and has 241 appearances on his professional resume.

Onetime American Association starter Junior Guerra has been one of the league’s poster boys for some time now because of his impressive span with the Milwaukee Brewers–he was their Most Valuable Pitcher in 2016 and opening day starter the next year–and the constant re-inventing of his mound repertoire continues to give lessons to other hopefuls in the league as to what can happen if they do not give up.

Despite the success, Guerra still pitched for nearly the major league minimum with a contract worth $545,000 last season.  “(He) should get a raise (and be somewhere) in the $2.5 to $2.8 million range depending on how good his agent is in arbitration”, Fansided  has predicted.

Turning 34 next month, the 2011 and 2013 Wichita starter basically reinvented himself after spending time on the disabled list and losing some of his innings with the Brewers last season when he turned to a curve, a pitch he had not been using at all.  It is believed to have earned him a spot on the postseason roster of the team that nearly reached the World Series.

SB Nation’s Brew Crew Ball pointed out that “after September 2nd, including six appearances to conclude the regular season and two playoff outings, Guerra’s revamped arsenal was 34% four-seam / 15% sinker / 9% splitter / 42% curveball.  Junior threw 190 pitches in those eight appearances, and 80 of them were his brand new pitch.  Batters hit .046 against the pitch–1-for-22–with 12 of those at-bats ending in a strikeout.”

Those facts should be incentive enough for most anyone.

Previously the chief spokesman for Baseball Commissioners Bowie Kuhn and Peter Ueberroth, Bob Wirz has been writing extensively about Independent Baseball since 2003.  He is a frequent contributor to this site, has a blog, www.IndyBaseballChatter.com, and a book about his life, “The Passion of Baseball”, is available at Amazon.com or for signed copies at www.WirzandAssociates.com.