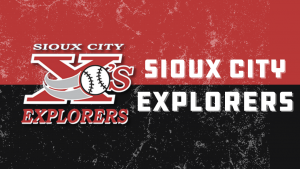 Sebastian Zawada singled home Jose Sermo in the tenth inning as the Explorers (18-11) edged the Saltdogs (15-12) 3-2 on Friday Night at Mercy Field.  Sermo opened the scoring in the first with a single to score L.T. Tolbert, and after Lincoln took a 2-1 lead in the fifth thanks to back-to-back singles by Skylar Weber and Gunnar Buhner, Joseph Monge scored the tying run for Sioux City on a wild pitch.  The game remained tied until the walk-off hit with two outs in the tenth by Zawada.

Josh Allen homered and Nick Zammarelli and Luis Roman each collected multi-hit games as the Cougars (12-16) beat the Milkmen (17-11) by a score of 8-2 on Friday night at Franklin Field.  Allen broke the ice with a three-run shot in the second as Kane County never trailed.  Vance Worley allowed just six hits and two runs in seven innings to earn the win.  Trey Martin homered for Milwaukee.

Michael Gunn pitched 6.2 innings of shutout ball as the Railroaders (12-16) shut down the Apollos (4-24) by a 5-0 score on Friday night at The Depot at Cleburne Stadium.  Cleburne broke a scoreless tie in the fourth as Zach Nehrir tripled home Chase Simpson and later scored on a John Nester single.  That was all Gunn and reliever Alex Fishberg would need, as they limited Houston to four singles in the game.

Danny Mars, T.J. Bennett, and Anfernee Grier all homered as the Dogs (19-11) slugged their way to an 8-5 win over the RailCats (13-16) on Friday Night at Impact Field.  Mars opened the scoring in the first with a solo homer, while Grier led off the second with a solo shot of his own.  Bennett added a two-run blast in the eighth for Chicago to make it 8-4.  Hayden Schilling homered for Gary SouthShore.

A six-run top of the first set the tone as the Canaries (14-14) outscored the RedHawks (17-12) by a 13-7 count on Friday night at Newman Outdoor Field.  Logan Landon and Jabari Henry each scored on an error before Shamoy Christopher capped the early outburst with a three-run homer.  Henry would add a second inning solo shot for Sioux Falls before Landon launched a two-run shot in the fourth.  Correlle Prime homered for Fargo-Moorhead.

A seventeen hit barrage, including thirteen singles, was plenty of offense as the Goldeyes (11-14) defeated the Monarchs (15-11) by a 14-8 score on Friday night at Legends Field.  Kyle Martin had four hits and three runs scored, while Logan Hill had four hits and drove in three as Winnipeg scored multiple runs in five of the nine innings.  Kansas City got two homers from Jan Hernandez and one each from Colin Willis and Morgan McCollough.