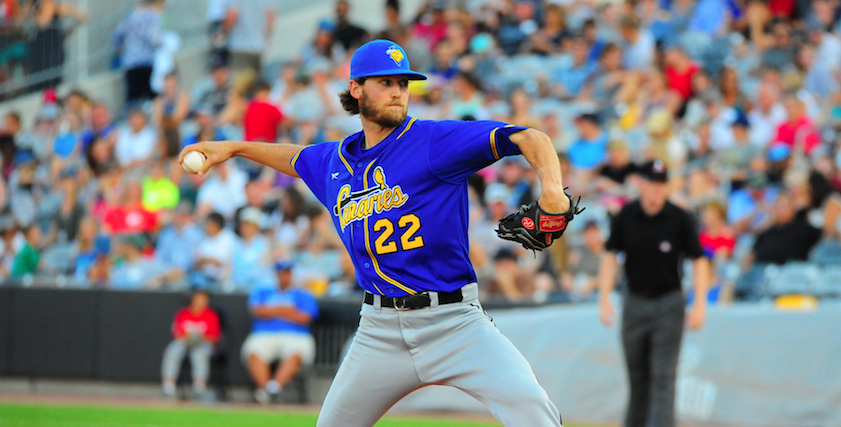 DURHAM, NC- The official statistician of the American Association, Pointstreak, has announced that Sioux Falls Canaries RHP Miles Nordgren (pictured) has been named this week’s Pointstreak Pitcher of the Week for the week ending August 13.

Nordgren tossed a complete game shutout on Thursday evening for the Canaries, blanking the St. Paul Saints at CHS Field in St. Paul. Over his nine innings, Nordgren allowed just two hits and two walks, and struck out three Saints. Sioux Falls cruised to a 7-0 win over their North division rivals.

Nordgren attended Birmingham-Southern College, from where he was picked by the Minnesota Twins in the 23rd round of the 2014 Major League Baseball Draft. He logged three seasons in the system, beginning with a 2014 stint in the Gulf Coast League. Nordgren split 2015 between Rookie-level Elizabethton (Tenn.) and Class A Cedar Rapids (Ia.), and split 2016 between Cedar Rapids and the Class A Advanced Fort Myers (Fla.) Miracle.

Sioux Falls will enjoy an off day on Monday, and open a road series at the Gary SouthShore RailCats on Tuesday evening at 7:10 p.m. Central time. The series can be seen live and for free at www.americanassociationbaseball.tv.