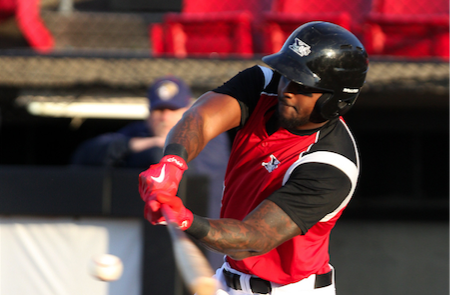 DURHAM, NC- The official statistician of the American Association, Pointstreak, has announced that Sioux City Explorers OF Levon Washington (pictured) has been named this week’s Pointstreak Player of the Week for the week ending August 13.

Washington hit .500 (13-for-26) this week, picking up two doubles, three home runs and eight RBI. He helped the Explorers to three wins over the course of the week.

The Gainesville, Fla. resident began his week on Monday in the opener of a road series against the Cleburne Railroaders. Washington was 3-for-3 in the game, driving in a run in a narrow 3-2 Sioux City defeat. A night later, Washington hit his first home run of the week, a solo blast as part of a 6-3 Explorers win in Cleburne. Although Sioux City fell 11-8 in a Wednesday slugfest, Washington turned in a memorable performance. He was 4-for-4 with a walk in the game, hitting two doubles, collecting an RBI and scoring three runs.

Sioux City continued their road trip on Thursday by opening a four-game series at the Lincoln Saltdogs. The Explorers won the opening game of the set 5-3, though Washington was hitless. On Friday evening, Washington played the hero role for Sioux City. With the game tied at 4-4 in the top of the 12th inning, Washington hit a two-run home run to propel Sioux City to a 6-4 road win. Washington had previously drawn two walks in the game. He closed his week with back-to-back two-hit games — a 2-for-4 effort with Sioux City’s lone RBI in a 4-1 loss Saturday and another 2-for-4 game Sunday, featuring a home run and an RBI single in a 5-4 defeat.

Washington was a second-round pick of the Cleveland Indians in the 2010 Major League Baseball Draft after a one-year stop at Chipola (Fla.) Junior College. He played six seasons in the Indians system, reaching as high as the Class A Advanced level, where he played 122 total games in 2012, 2014 and 2015.

The Explorers enjoy an off day Monday, and will open a home series with the Fargo-Moorhead RedHawks on Tuesday at 7:05 p.m. Central time. The series can be seen live and for free at www.americanassociationbaseball.tv.