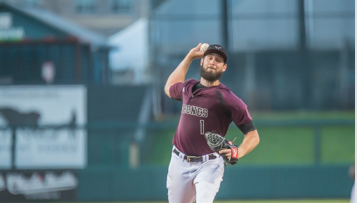 DURHAM, N.C.- The Kansas City T-Bones are in contention for their first-ever bid to the American Association playoffs, but a major factor in the club’s success is headed back to affiliated baseball. RHP Scott Carroll, who has pitched in 47 career Major League games, has been sold to the Chicago Cubs. The Cubs will assign him to the Class AAA Iowa Cubs, who will conclude a road series today at the Omaha Storm Chasers with a 12:05 p.m. Central time matinee.

Carroll departs Kansas City with an 8-3 record and 2.93 ERA. He has made 15 starts over the course of the season, striking out 78 and walking only 17 in 98 innings.

One of the highlights of Carroll’s tenure with the T-Bones took place on July 1, when he tossed seven innings at the Sioux City Explorers, limiting the opposition to two runs on four hits and three walks. Carroll struck out a season-high 10 in the outing, and earned the win in a 6-2 triumph for Kansas City. He turned in another dominating effort on July 28 against the Texas AirHogs, when he allowed just two runs once again on six hits and a walk. Over seven innings, Carroll struck out nine AirHogs in a similar 6-2 Kansas City win. His final start in a Kansas City uniform came on August 9, when he allowed just one earned run on five hits over seven innings at the Fargo-Moorhead RedHawks. Carroll fanned six and did not walk a batter in a narrow 4-3 win.

Carroll came to the T-Bones fresh off a 2016 season that saw him pitch with four clubs at three levels. The highlight of Carroll’s 2016 was a three-game stint with the Chicago White Sox, but he also pitched in 16 games with the White Sox’s Class AAA affiliate, the Charlotte (N.C.) Knights. Additionally, Carroll spent time in the Texas Rangers system in 2016, making seven appearances with the Class AA Frisco (Tex.) RoughRiders and two more with the Class AAA Round Rock (Tex.) Express.

The three seasons in Major League Baseball marked the culmination of a seven-year Minor League journey for Carroll. He was selected by the Cincinnati Reds in the third round of the 2007 Major League Baseball draft from Missouri State University, and pitched in the Reds’ system until 2012, reaching as high as the Class AAA Louisville (Kent.) Bats. Carroll signed with the White Sox as a free agent in July 2012, and reached the Major Leagues less than two years later.

The T-Bones will play a doubleheader this evening on the road at the Wichita Wingnuts. The first game begins at 5:05 p.m. Central time, and can be seen, like all American Association games, live and for free at www.americanassociationbaseball.tv.