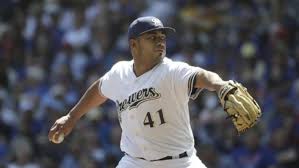 The doubt seems to have been erased as to whether onetime Wichita starter Junior Guerra, the converted catcher, belongs in the major leagues and in Milwaukee’s rotation.

The Brewers have won all five of the ’11, ’13 Wingnuts hurler’s starts, and he has a 3-0 record with a commendable 3.30 earned run average after going the first five scoreless innings in a 3-2, 13-inning triumph over Atlanta Wednesday.

“He put zeros on the board,” Brewers manager Craig Counsell told MLB.com. “It’s good when a guy can pitch like that (without his best stuff).” The time before against the consensus best team in baseball, the Chicago Cubs, the 31-year-old Venezuelan native had the best of his starts–and eight total major league appearances–when he collected 11 strikeouts in a career-high 113 pitches in seven strong innings of the 5-3 Milwaukee victory.

Three seasons removed from the American Association, Guerra has given up only three earned runs in his last three starts, a period covering 18 innings. He has allowed only 11 hits in that span while striking out 21 and bringing his season log to a strikeout per inning (30 innings, 30 strikeouts).