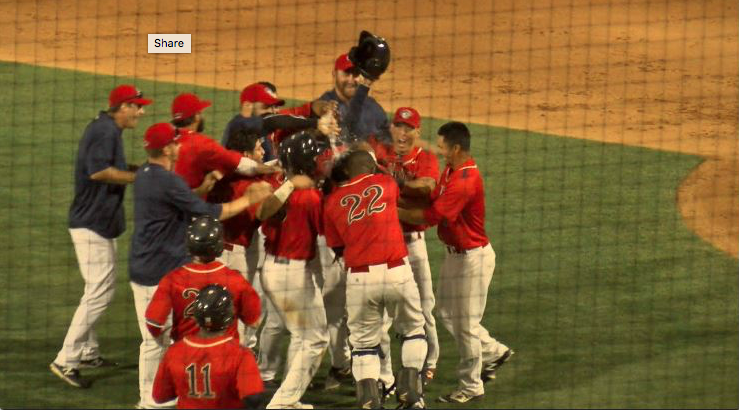 LINCOLN, NEB. – The Lincoln Saltdogs beat the Sioux Falls Canaries 1-0 in 11 innings Wednesday night to collect their fifth straight walk-off win at home.  The string of walk-off wins ties the Houston Astros’ record from July of 1986.  It is believed to be a new Independent Baseball record.

The Saltdogs swept the Texas Airhogs by hitting three walk-offs from May 29-31.  Then, after a road series against the Winnipeg Goldeyes, the Saltdogs beat the Sioux Falls Canaries with extra-inning walk-offs in the first two games of a three game series.

Saltdogs President and General Manager Charlie Meyer says it has been a special start to the season.

“It’s been thrilling to watch the team perform their late-inning comebacks at Haymarket Park.  The streak is a testament to the players’ refusal to quit even when behind late in games.  This stretch has created excitement for our dedicated fan base.”

The Saltdogs have a chance to set a baseball record tonight if they beat Sioux Falls with a walk-off win.  First pitch is at 6:45 CT with coverage beginning at 6:15 on saltdogs.com and https://www.americanassociationbaseball.tv/.