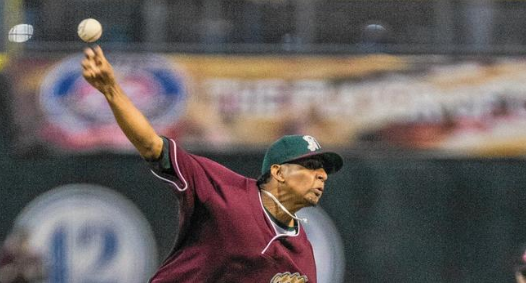 Gary SouthShore starter Charlie Rosario (pictured) threw a two-hit, complete game shutout to guide the RailCats to a 3-0 win over the Lincoln Saltdogs in a pitcher’s duel. With the win, Rosario improved to 5-1 on the year, tying the league lead in victories on the mound. LF Cameron Newell went 3-for-4 with two runs scored to pace the offense that outhit Lincoln 7-2. For Lincoln, starter Shairon Martis had an excellent outing allowing just two earned runs over eight innings of work. Saltdogs’ 2B Dan Hennigan went 2-for-4.

St. Paul 2B Alonzo Harris and DH Tony Caldwell both blasted two home runs to guide the Saints to an 11-5 victory over the Winnipeg Goldeyes. Starter Mark Hamburger remained undefeated, improving to 5-0 throwing eight innings, allowing four earned runs. Hamburger’s fifth win on the hill is tied for the most in the league. For Winnipeg, reliever Zachary Dando threw 2.1 scoreless innings while SS Maikol Gonzalez went 2-for-4 to pace the team.

The Explorers’ offense exploded as a 16-hit output helped lead Sioux City to a 16-8 victory over the Texas AirHogs. Reliever Jake Kubler earned the victory tossing 1.2 scoreless innings. Sioux City 2B Nick Perio went 2-for-6 with a triple along with four RBI as he was just one of six players with at least two hits. For Texas, RF Cody Lenahan went 2-for-4 to pace the offense that led 6-4 heading into the fourth inning.

The Joplin Blasters outhit the Canaries 13-6 en route to their 7-2 victory over Sioux Falls. Joplin LF Willie Cabrera and C Juan Medina each had three hits. Reliever Jose Ortega earned the win for the Blasters on the mound. With the game tied 2-2 entering seventh inning, Joplin would score five runs over the next two frames to take the lead. For Sioux Falls, C Michael Pair hit his third home run of the season.

Fargo-Moorhead starter Tyler Herron improved to 4-1 throwing a complete game, four-hit shutout to lead the RedHawks to an 8-0 win versus the Wichita Wingnuts. 3B Josh Mazzola and 1B Brian Humphries both homered to guide the offense. Fargo-Moorhead outhit the Wingnuts 12-4. For Wichita, SS Leo Vargas went 1-for-3.