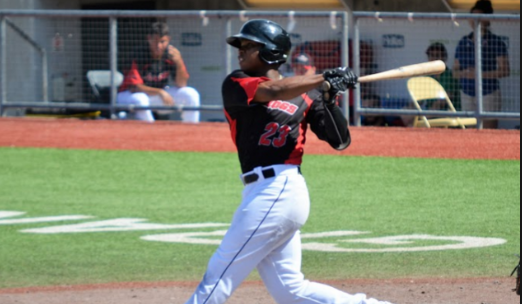 DURHAM, NC- The official statistician of the American Association, Pointstreak, has announced that Texas AirHogs’ OF Burt Reynolds (pictured) has been named this week’s Pointstreak Player of the Week for the week ending June 12th.

The Newark, NJ native had a tremendous week at the plate hitting .379 (11-for-29) with five home runs, 10 RBI and 11 runs scored. Currently, he leads the league in home runs (12). Reynolds’ hot streak began on June 6, where he went 2-for-4 with a home run and three runs scored in a 12-3 win over St. Paul. After back-to-back three hit performances on June 8 and June 9, Reynolds’ momentum carried into yesterday’s 7-3 win over Wichita. In the contest, the Okaloos-Walton product was excellent at the plate going 2-for-4, blasting two home runs and five RBI.

At the age of 19, Reynolds began his professional career in 2008 playing in the Tampa Bay Rays organization until 2010. In 2014 and 2015, he played in the Seattle Mariners organization, reaching the AA level last year. Over his minor league career, Reynolds has hit 25 home runs and 161 RBI.

After an off day today, the AirHogs will take on the Winnipeg Goldeyes tomorrow night. First pitch from Shaw Stadium is set for 7:00 PM. Fans can watch select American Association games live and for free at www.americanassociationbaseball.tv.