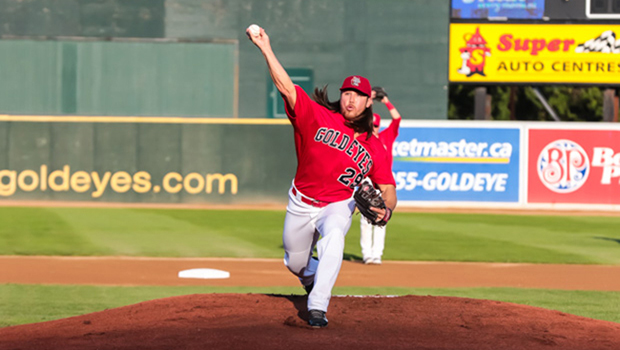 DURHAM, NC- The official statistician of the American Association, Pointstreak, has announced that Winnipeg Goldeyes’ RHP Edwin Carl (pictured) has been named this week’s Pointstreak Pitcher of the Week for the week ending June 12th.

The University of New Mexico product had two masterful performances this week leading Winnipeg to a pair of victories. On June 7, Carl allowed one earned run over seven innings, striking out seven while scattering just four hits in an 11-1 victory at Sioux City. Yesterday, he was dominant once again, hurling six shutout innings, 10 strikeouts while only surrendering three hits in a 4-2 win at Fargo-Moorhead. Currently, the Farmington, NM native is 2-1 with a 3.45 ERA and has struck out 28 hitters over 28.2 innings.

Tomorrow night, Winnipeg will host the Texas AirHogs at 7:00 PM from Shaw Stadium. Fans can watch select American Association games live and for free at www.americanassociationbaseball.tv.