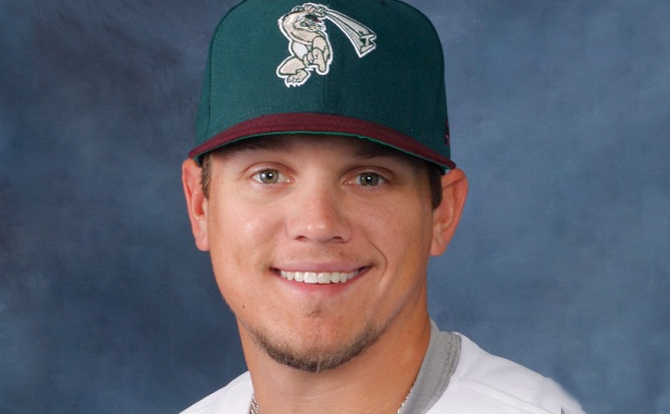 Back-to-back homeruns in the fourth inning by SS Nate Samson and CF Fehlandt Lentini helped the Winnipeg Goldeyes double up the Grand Prairie AirHogs 10-5. Samson struck first when he belted a grand slam off of a 1-0 delivery. Lentini immediately followed with a solo shot that put the Goldeyes up 7-0. The grand slam was Samson’s only hit of the day but Lentini was 2-for-4 and also scored twice. Three other Goldeyes had multi-hit games and RF Ryan Scoma also had a strong night as he went 1-for-2 drawing a pair of walks and adding two RBI. The AirHogs put together five runs in the fifth through the seventh inning as LF Aaron King homered and 1B Andres Rodriguez doubled in a pair of runs. P Justin Garcia was tabbed as the winner.

Though he never put the ball in play from the plate, Gary SouthShore 3B Daniel Pulfer (pictured) made the difference in the RailCats 6-5 win against the Lincoln Saltdogs. In the boxscore Pulfer had zero at bats because he drew five walks on Sunday. He also scored three runs including the game-winning run in the bottom of the ninth inning. The RailCats jumped out to an early lead scoring in each of the first three innings but the Saltdogs battled back with the help of a three-run homerun by C Jeremy Mayo in the seventh inning. Mayo was 2-for-4 on the day. That homerun briefly gave the Saltdogs the lead but Pulfer scored on a Chase Tucker single in the bottom of the inning to tie the score. The RailCats pitcher Clay Zavada was credited with the win for throwing a scoreless ninth inning.

Catcher Cole Armstrong’s two run homerun in the top of the sixth inning proved to be difference in a rain shortened 3-2 win for the Wichita Wingnuts over the Kansas City T-Bones. Armstrong was 2-for-3 on the day and scored twice in addition to his two RBI. That homerun broke a 1-1 tie and scored 1B C.J. Ziegler who walked in the previous at bat. The T-Bones started to rally in the bottom of the sixth as DH Ray Sadler scored RF Brandon Jones with a double but that was all the offense Kansas City could produce. A rain delay in the top of the seventh inning led to the decision to call the game. Wichita LF D Perren had a game-high three hits going 3-for-3 with an RBI.

The Laredo Lemurs claimed an early lead with three runs in the bottom of the first inning and held on to beat the visiting RedHawks from Fargo-Moorhead 4-2. Each batter in the Laredo lineup had at least one hit in the game and the Lemurs’ DH John Allen led the way with three hits. The Lemurs pitching staff limited the RedHawks to just three hits for the game with the Laredo bats connected on 12 hits. RF Jon Gaston had a game-high two RBI, both of which came on a double in the first inning. Reliever Mark Serrano was credited with the win for his 1.2 inning effort.

The El Paso Diablos staved off a sweep by holding off the Amarillo Sox 12-8. A pair of four-run innings – the third and the seventh – helped the Diablos stay out in front and claim their first win of the season. The two teams combined for 20 runs and 27 hits including multi-hit games by eight different players. Both Diablos SS Maikol Gonzalez and 3B Edgar Corcino had three hits and Corcino was 3-for-3 with three RBI. For the Sox, 2B Joe Anthonsen and 1B Joe Weik had two-RBI games. P Michael Joyce picked up the win for his two innings of relief while Joe Testa was tagged with the loss.