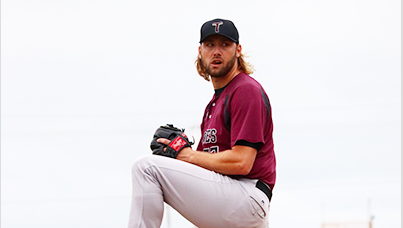 DURHAM, NC- The official statistician of the American Association, Pointstreak, has announced that Kansas City T-Bones RHP Matt Sergey (pictured) has been named this week’s Pointstreak Pitcher of the Week for the week ending July 30.

Sergey’s lone start of the week was a memorable one, as he tossed a seven-inning no hitter. Facing the Texas AirHogs on Thursday in the opening game of a doubleheader, Sergey walked just two batters, allowing a run without a hit. The former Campbell University hurler struck out 10 in the effort, which was the first American Association no-hitter for the T-Bones. Kansas City won the game by a 2-1 score, handing Sergey the victory on the contest.

2017 is Sergey’s third season in the American Association. He spent part of the 2015 and 2016 season with the Laredo Lemurs, putting up dominating numbers. In 2015, Sergey was 2-0 with a 0.00 ERA in three starts, and he followed that up with a 4-0, 0.82 ERA in seven starts in 2016. Sergey was named the Pointstreak Pitcher of the Week for the American Association for the week ending August 30, 2015, a week in which he threw a nine-inning one-hitter against the AirHogs. Acquired by trade in August 2015, was in his third season with the Frontier League before the trade. He pitched with the Southern Illinois Miners and Gateway Grizzlies in 2013, going 2-5 with a 4.97 ERA and 71 strikeouts. He spent 2014 with Washington, where he was 3-1 with a 1.97 ERA in 18 appearances (six starts). Sergey made Frontier League history by throwing a perfect game on August 24, 2014 against the Grizzlies.

Sergey has also pitched in affiliated baseball with the Oakland Athletics organization, appearing in 20 games with the Class A Advanced Stockton (Calif.) Ports over the 2016 and 2017 campaigns.

The T-Bones visit the Cleburne Railraoders tonight at 7:06 p.m. Central time. The game can be seen live and for free at www.americanassociationbaseball.tv.