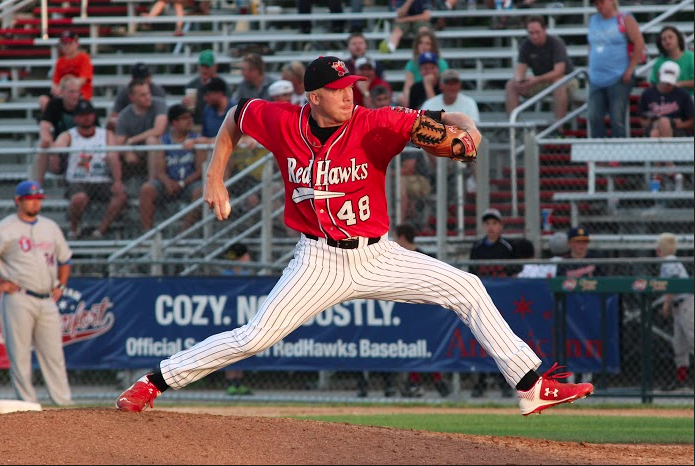 DURHAM, NC- The official statistician of the American Association, Pointstreak, has announced that Fargo-Moorhead RedHawks RHP Mike Nesseth (pictured) has been named this week’s Pointstreak Pitcher of the Week for the week ending August 17.

Nesseth becomes the first RedHawk to win the award in 2015 thanks to three strong relief appearances this week. Over 4.2 innings, he allowed two runs (one earned) on six hits with no walks and two strikeouts.

The Windom, Minn. resident first took the mound on Monday of this week, tossing an inning against the Kansas City T-Bones. He allowed a hit, but kept the T-Bones off of the board by picking up a strikeout. Fargo-Moorhead won 5-3 and Nesseth earned the save. The following night, Nesseth pitched in a Fargo-Moorhead win, 5-4 over the Gary SouthShore RailCats. In an inning, he allowed a run on two hits. Nesseth’s last appearance of the week came on Friday against the Winnipeg Goldeyes. He worked 2.2 innings, scattering four hits, but did not allow a run and picked up a strikeout. The RedHawks earned the win that night, 12-9. Nesseth was credited as the winning pitcher on the contest, his first win in a Fargo-Moorhead uniform.

Nesseth is now 1-3 on the season with a 2.89 ERA over 20 relief appearances. He has saved 12 games for Fargo-Moorhead since joining the club on June 18. He spent parts of five seasons with the Atlanta Braves and Philadelphia Phillies systems prior to moving over to the independent ranks. He reached as high as the Class AAA level, playing in 11 total games across three seasons with the Lehigh Valley IronPigs, Philadelphia’s AAA affiliate. Stanton’s best season was in 2013, when he carried a 2.50 ERA over 68.1 innings pitched between Class A Advanced Clearwater, Class AA Reading and Lehigh Valley. He saved nine games and struck out 34.

The RedHawks open a home series at 7:02 p.m. tonight against the Lincoln Saltdogs. All games of the series will be available live and for free at www.americanassociationbaseball.tv.