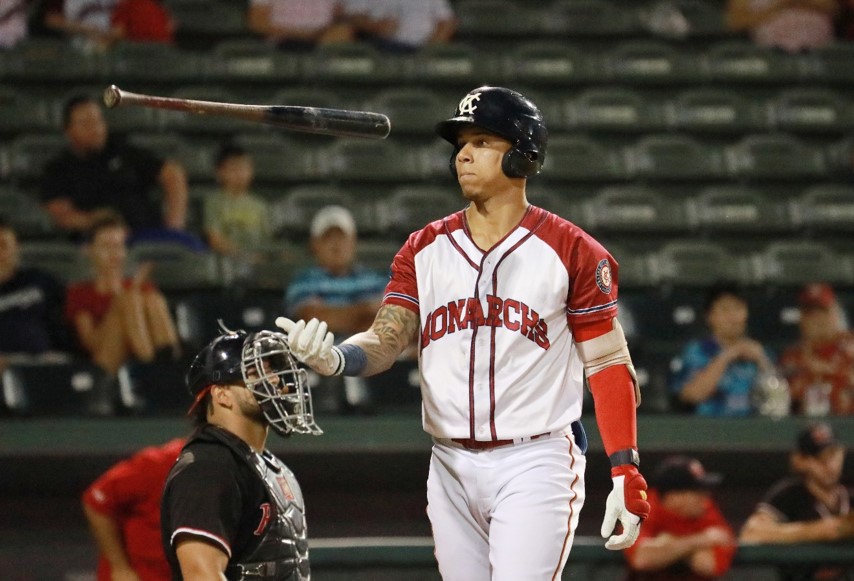 On the back of a Harrison Francis quality start, the Gary SouthShore RailCats staved off the Milwaukee Milkmen and secured a 3-2 victory.

While the RailCats waited on their bats to break through, Francis shut down the Milkmen on the mound.  He did not allow a hit through his first four innings, striking out five in the process.

Milwaukee picked up their first two hits in the top of the fifth, placing runners on first and second base with two outs, but the right-hander kept his cool.  He coaxed a Jeremiah Burks flyout to hold the Milkmen scoreless.

Shortly afterward, the RailCats opened the scoring in the bottom half of the inning.  Thomas Greely worked his way aboard by singling to center field, and two batters later, Daniel Lingua ripped a two-out double down the right field line to score him all the way from first base, giving Gary SouthShore a 1-0 lead.

Francis navigated around a two-out single in the top of the sixth to keep the edge intact, putting the finishing touches on an excellent outing.  He tossed six scoreless frames, allowing just three hits and two walks, striking out six to earn his fifth win of the season.

Lester Madden helped the RailCats add on in their next turn at bat.  Jesus Marriaga and Victor Nova singled to begin the inning before a Tom Walraven walk loaded the bases with nobody out.  Madden capitalized on the situation by lining a two-run single, giving the ‘Cats a three-run edge heading into the final three frames.

Aaron Phillips entered from the bullpen to throw a perfect seventh inning, but once he departed, the Milkmen offense sprung to life.  Three consecutive one-out base hits in the top of the eighth placed the go-ahead run in the batter’s box, and Will Kengor decreased Milwaukee’s deficit to one by driving in two runs on a single of his own.

However, as Kengor attempted to advance an extra 90 feet, Sam Abbott alertly cut off the throw to the plate and fired a strike to second base to record an important second out.

As the tying run stood on third base, manager Lamarr Rogers turned to Jack Eisenbarger to keep the RailCats in front.  The decision paid immediate dividends as he induced a weak groundout out of Keon Barnum, placing Gary SouthShore three outs away from victory.

Eisenbarger returned to the rubber in the top of the ninth, and the RailCats defense stepped up to secure the result.  LG Castillo robbed Miguel Gomez of a leadoff single through his sliding catch in right field, and Madden made a running grab in left field to deny Hector Sanchez extra bases for the final out.

The Winnipeg Goldeyes (51-47) lost 4-0 to the Sioux Falls Canaries at Shaw Park on Saturday night.

Canaries’ starter Stevie Ledesma (6-4) pitched a complete game, five-hit shutout to earn the win.  Ledesma walked two and struck out 13.  It was the first nine-inning complete for a Canaries’ pitcher since the late Tyler Herron went the distance on August 12th, 2020 versus St. Paul.

Sioux Falls (33-65) broke a scoreless tie scoring two unearned runs in the top of the sixth.  Connor Blair reached on an error leading off and took second on an Aaron Takacs single to right-centre.  Angelo Altavilla’s sacrifice attempt resulted in a throwing error by Goldeyes’ starter Luis Ramirez who attempted to force out Blair at third base.  Blair scored on the play to give the Canaries a 1-0 lead.  Sioux Falls went on to load the bases and made it 2-0 on a sacrifice fly to centre from Osvaldo Martinez.

Jabari Henry led off the top of the seventh with a home run to left-centre to push the lead to 3-0.  John Nester’s two-out, RBI single to left plated Takacs with the Canaries’ fourth run.

Will McAffer and Paul Schwendel each worked a scoreless inning in relief for Winnipeg.

The Kansas City Monarchs (63-35) dialed up a pair of home runs and rode a solid outing from starter Jalen Miller (2-0) to take a 3-2 win in game two of the four-game series over the Fargo-Moorhead RedHawks (64-34).

The Monarchs used the long ball right off the bat in the first inning. Mallex Smith singled to start the game off lefty hurler Peyton Wigginton (9-3). Then, with two outs, Jacob Robson hit his eighth homer of the season to center to give “kay-see” a 2-0 lead. The home run tied the franchise mark for home runs in a season at 162.

In the home half of the fifth, Alexis Olmeda hit a solo home run to right his seventh to give the Monarchs a 3-0 lead and to set a new franchise single-season record. The Monarchs old record came in 2010 when the club played in the Northern League.

Jalen Miller would surrender just two hits in 5.1, but the RedHawks would work six walks on the evening. Miller added six strikeouts and would exit in the sixth with one out.  The right hander got stronger as the game went on, and in the fourth and fifth inning he would walk the lead-off batter then retire the next three batters to keep the “Fargos” at bay.

In the sixth Joran Martinson came into the game with one on and one out. Rymer Liriano would single but was retired trying to stretch the single to a double on an outfield assist from Mallex Smith. Martinson would get the final out on a fly out off the bat of Alec Olund to keep the Monarchs in the lead at 3-0.

Brandon Koch worked a 1-2-3 eighth including two strikeouts to take the game to the top of the ninth. Alex Valdez would strikeout pinch hitter Ben Livorsi but issue a free pass to Peter Maris. Manuel Boscan hit into a fielder’s choice forcing out Maris at second for the second out of the inning. Valdez would strikeout Drew Ward looking to earn the save (2) in a 3-2 Monarchs win.

The win pulled the Monarchs to one game behind the Fargo-Moorhead RedHawks for the West Division lead in the American Association with two games to play. The RedHawks magic number to win the west is two. The RedHawks will clinch the division crown with one more win while the Monarchs will need to win the last two games to claim their third regular season division title in a row.

The Sioux City Explorers had the run that could have sent them to the postseason on base in the bottom of the ninth but were unable to complete the comeback as the Lincoln Saltdogs kept their postseason hopes alive with a 5-4 win.

Both teams traded a pair of runs in the first inning. Lincoln scored twice from a Luke Roskam sacrifice fly to right and a Josh Altmann single to take a 2-0 lead.

Sioux City tied the game quickly in the bottom of the first. Danny Amaral and Danry Vasquez hit back to back doubles within the first three pitches of the frame to cut the deficit in half. Trey Martin tied it 2-2, with a sac fly to center.

The Saltdogs took the lead for good in the third. Roskam, who reached on a single, scored from first base when Altmann doubled down the left field line. An error by the X’s left fielder aided in Roskam scoring from first to hand Lincoln a 3-2 lead.

The Altmann double was the final baserunner that Explorers starter Kevin McCanna (10-6) allowed. He retired the final eleven batters he faced, and retired the last five of that stretch all via strikeout. He took a tough loss however as he tossed six innings and allowed three runs, two earned on six hits with two walks and seven strikeouts on a season high 120 pitches.

For Lincoln, the Saltdogs pulled their starter Zach Keenan after only one inning and filled the final eight innings with a combination of six arms out of the bullpen. Jonathan Cheshire (2-2) earned the win by tossing two shutout innings with two hits and no walks with three strikeouts.

The Saltdogs added a pair of runs in the seventh. Ryan Long drove in Justin Byrd with a base hit to right field. The Explorers in an attempt to throw Long out advancing to second on the throw committed an error allowing Rayder Ascanio to score a second run on the play and giving Lincoln a 5-2 lead.

In the eighth, Sioux City pulled a run closer when Chase Harris led off with a bunt single and advanced to third on a single and a ground out, scored from a pass ball to make it 5-3.

In the bottom of the ninth the Explorers got the tying run to first after a hit batter and a walk. Sioux City pulled to within a run on a base hit from Miguel Sierra. But with the tying run at second, the Saltdogs turned a game-ending double play to keep their season alive.

Carson Lance (3) picked up the save by getting the final three outs for Lincoln.

The Kane County Cougars pitched a combined shutout to earn a 3-0 victory over the Chicago Dogs on Friday night at Northwestern Medicine Field. With the win, the Cougars pulled into a tie with Chicago for first place in the American Association East Division.

CJ Carter (1-4) made just his second start of the season, and pitched a gem. The Cougars (53-45) right-hander tossed five scoreless innings, while allowing just four hits with two strikeouts against two walks.

In relief of Carter, Ryan Richardson tossed three scoreless innings of his own. Richardson allowed just one hit and recorded two strikeouts with no walks. In the ninth inning, the Dogs had two runners reach against Ryan Tapani, but the Cougars closer struck out Cody Bohanek to earn the save and preserve a 3-0 victory.

The Cougars jumped out to an early lead against Chicago starter Tanner Lawson (1-1). In the bottom of the first, Ernie De La Trinidad led off the frame with a single before Sherman Johnson drew a walk. Cornelius Randolph then grounded into a fielder’s choice, but an errant throw allowed De La Trinidad to score from second and make it 1-0. Kane County added two more runs in the frame on RBI singles by Nick Franklin and Alexis Pantoja to go ahead 3-0. Following the first inning, neither team scored in the remaining eight frames.

The DockHounds came out swinging in the first when Jordan Schaffer hit a lead-off double. Later in the inning Schaffer was hit in by Daikan Yoh on a single.

Nothing notable happened until the bottom of the 6th inning when the Railroaders scored their first four runs. Chase Simpson hit a double to score Chuck Taylor and on the following at bat Hill Alexander cranked a 2-run homer to knock in Simpson.

Kacy Clemens also scored later in that same inning on a pass ball.

In the top of the 7th the DockHounds brought it within one run when Daniel Martins-Molinari came up to the plate. During his at bat Lamar Briggs scored on a pass ball and Casey Dykstra scored on a sacrifice fly to center field.

The Railroaders responded in the bottom of the 7th with another RBI from Simpson. Also in this inning Nick Shumpert hit a single and scored two men – Simpson and Alexander.