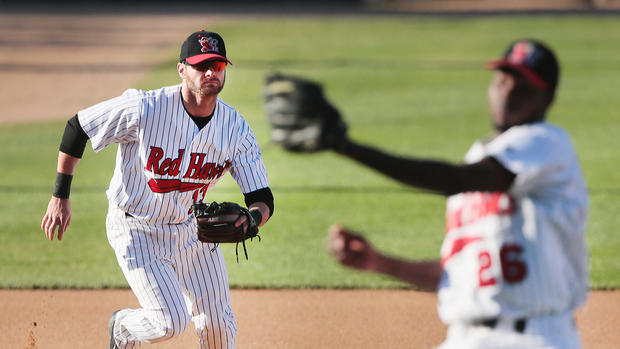 DURHAM, NC- The official statistician of the American Association, Pointstreak, has announced that Fargo-Moorhead RedHawks’ INF Josh Mazzola (pictured) has been named this week’s Pointstreak Player of the Week for the week ending June 26th.

Mazzola had an excellent week batting .500 (12-for-24) with four home runs and 12 RBI. The Missouri State University product’s great stretch started with a 3-for-4 performance in a 4-2 win against Sioux Falls. After another three hit night on June 23, Mazzola would then blast two home runs in a 10-9 win over Kansas City on June 25. Currently, he is hitting .328, which is second best on the team. His nine home runs leads the club and 40 RBI lead the club.

From 2008-2011, Mazzola played in the San Francisco Giants organization, reaching the advanced A level in 2010. The Santee, CA native played with the Winnipeg Goldeyes from 2012-2015. This season is his first with the Fargo-Moorhead RedHawks.

The RedHawks will be back in action when they travel to Kansas City to take on the T-Bones. First pitch from CommunityAmerica Ballpark is slated for 7:05 PM. Fans can watch select American Association games live and for free at www.americanassociationbaseball.tv.