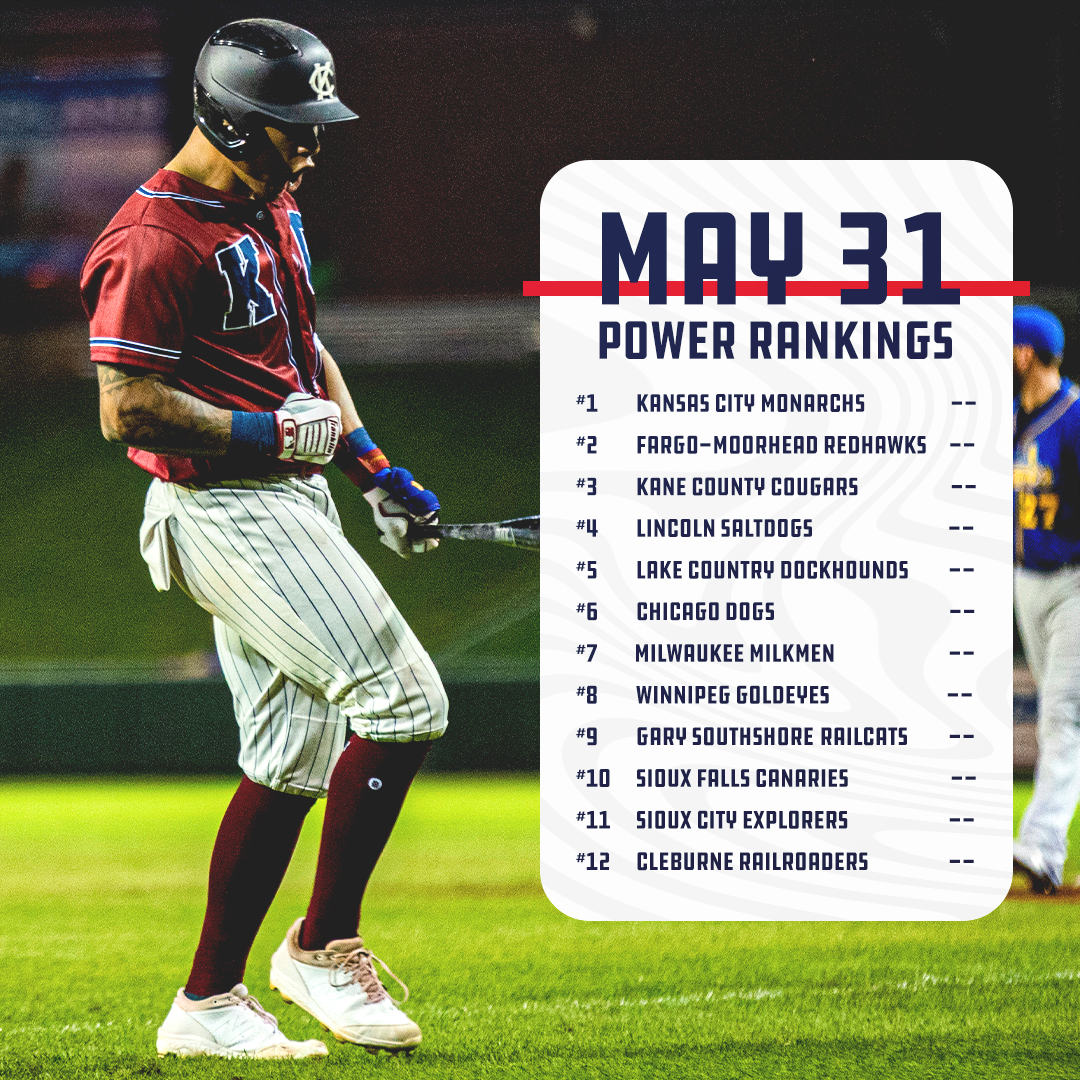 The reigning champions are back, folks. The Monarchs’ season took some time to rev up, featuring a 2-3 start and a trio of one-run losses. But KC’s current homestand has been nothing short of dominant, featuring four straight wins where the Monarchs scored a minimum of 14 runs. It’s not hard to see why the offense has been so dominant given the pedigree of its stars. The Monarchs’ starting nine features four former big leaguers, plus reigning Pointstreak Batter of the Week Jan Hernandez. “It’s special with this group of guys,” Hernandez told American Association NOW on Monday. “When you’re in the lineup, you’re like, Matt Adams is in the box, then comes [Darnell] Sweeney, then Gaby [Guerrero], it’s a lot of fun.”

While the lineup is rightfully earning praise for their weekend performance, the Monarchs’ pitching staff has been equally impressive. The club sports a league-best 3.08 ERA, nearly 1.3 runs better than the next-best team. Former big leaguer Matt Hall leads qualifying AAPB starters with a 1.06 ERA.

As RedHawks radio voice Jack Michaels said, eight is great, but nine is fine. Fargo-Moorhead’s nine-game winning streak has propelled them to the top of the West division, and their pitching staff has been a big reason why. The RedHawks sport a 4.36 ERA, second-best in what’s been a hitter-friendly start to the season. Timely hitting has also been key to the RedHawks’ success: they’re a league-best 10-2 in games decided by two runs or fewer. First baseman Drew Ward leads the Association with a 1.230 OPS (minimum 35 plate appearances).

The American Associations newest rivalry is born. The Cougars and DockHounds impressed in a six-game home-and-home series this past week, with each side taking two of three on their home field. The Cougars have had the edge over the full season, thanks largely to a balanced and dangerous lineup. Seven Cougars sport a batting average above .300 through Sunday’s action, and the team’s average is an Association-best .312.

Talk about finding ways to win. The Saltdogs have had to manage more than their fair share of absences from the lineup so far this year; they’ve used 18 different batters and 14 different pitchers so far. Still, manager Brett Jodie has the ‘Dogs nipping at the heels of the red-hot RedHawks in the West. They’ve also got a two-way star in Garett Delano. The former Mercer University star has a .423 batting average and 2.13 ERA this season – not a bad combination! Before running into the Kansas City buzzsaw on Monday night, their pitching staff had gone eight straight games allowing four runs or fewer, no easy feat in this league.

The Association’s newest team has wasted no time in becoming competitive. Daikan Yoh’s arrival from the Japanese league has made headlines in Oconomowoc, but TJ Bennett has been the DockHounds’ biggest star at the plate. Playing under his father, manager Jim Bennett, the 29-year-old has blasted six home runs and driven in 15, earning an 1.102 OPS. He’s not the only DockHound with six bombs: Gio Brusa joins him on that list and has reached base safely in his last nine games.

The boys from Rosemont have been flying under the radar as of late, but they’re hot. After winning in Kansas City on May 22 (no easy task), the Dogs took five of six on the road against the Cleburne Railroaders. Catcher Ryan Lidge has picked right back up from his all-AAPB season a year ago, hitting a team-best .347 with three home runs.

You can’t stop Keon Barnum, you can only hope to contain him. After seeing Adam Brett Walker take his crown as the Association’s single-season home run champ, and seems determined to take it back. Barnum has an Association-best seven home runs to start the season, with a .364 batting average to boot. Milwaukee’s Chad Sedio leads the Association with a .417 batting average, and reigning starting pitcher of the year Myles Smith has earned a 3.38 ERA.

Lamarr Rogers’ first year as the RailCats’ manager has been up and down to start, with Gary SouthShore yet to win a series. There are some reasons to be optimistic, though. For one, the team has the third-best ERA in the Association, at 4.77 through Monday’s games. John Sheaks (1.10 ERA) and Lief Strom (1.76) have been as good of a 1-2 punch as any in the league to start the year.

The Birdcage giveth, and the Birdcage taketh away. The Birds have always played at one of the American Association’s most hitter-friendly parks, and while the new turf looks great, the fences are just as accessible. The Canaries’ offense has thrived, with outfielder Kona Quiggle hitting .381 and slugger Jabari Henry mashing six home runs. Pitching has been more difficult for Sioux Falls: the team has a league-worst 8.62 ERA and has allowed a league-most 30 longballs.

Former major leaguer Nick Franklin has a team-best six home runs and a .302 batting average, and Gabe Snyder finished the week with four home runs in five games. Steve Montgomery’s pitching staff has struggled, but it’s important to point out the team has faced a difficult schedule to start the year. Every team they’ve played so far ranks either first or second in their division. They’re also the only team to win a series against Kansas City this year, beating the Monarchs in the first two games of the season. The Explorers are 0-5 in one-run games this season, suggesting their luck could turn around soon.

The ‘Roaders will look to start fresh when they make the trip to Shaw Park to face the Goldeyes this week. The club is coming off a 1-8 homestand, but the one win was spectacular, with longtime Railroader Zach Nehrir delivering a walk-off home run. With the playoffs expanded to four teams in each division for this season, Cleburne and their neighbors in the standings are by no means out of contention.