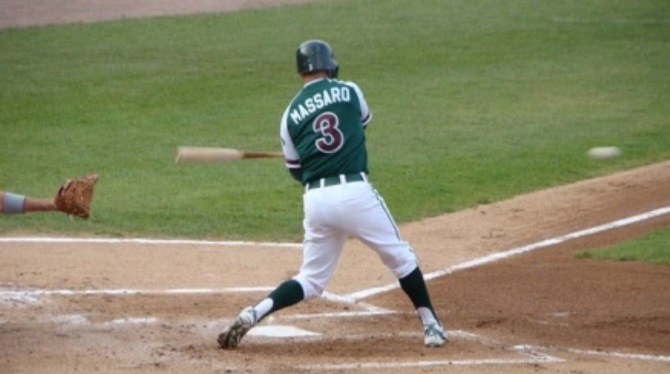 Gary SouthShore DH Mike Massaro (pictured) was red-hot at the plate all day, so it was fitting that Massaro drove in the game-winning run in the top of the 11th with a two-RBI triple. Massaro finished 4-for-6 at the plate with two triples, a double and a single. He also scored two runs and knocked in a game-high three RBI. Following his 11th-inning triple, Massaro scored on a wild pitch to seal the game. Gary SouthShore LF Adam Klein also had a productive day at the plate, batting 2-for-4 with three runs scored. After allowing a walk and a single, which brought the tying run to the plate, RailCats relief pitcher Clay Zavada recorded three straight outs to clinch the win.

A grand slam from St. Paul 1B Craig Brazell highlighted an 8-5 St. Paul win against Winnipeg. Brazell’s blast gave St. Paul a 4-1 lead in the third inning, but Winnipeg would battle back to tie the game at four in the fifth inning with consecutive RBI singles from LF Fehlandt Lentini and C Luis Alen. The Saints responded with a rally of their own in the bottom of the frame, scoring three runs to take the lead for good. Leading the way for the Saints, LF Willie Cabrera batted 2-for-5 with two RBI and a run scored, and CF Jose Hernandez went 2-for-4 with an RBI. Saints’ starter Anthony Claggett pitched six innings and allowed four runs to pick up the win. With the win, Claggett is now 4-1 this season.

Sioux City starter Richard Salazar turned in a gem, allowing just one run and four hits in eight innings to lead Sioux City to a 7-1 win against Lincoln. He is now 3-0 on the season. Salazar entered the game with 10 strikeouts so far this season and matched that total in Tuesday’s start, while walking only one batter.  RHP Cody Satterwhite kept it going with a 1-2-3 ninth inning to earn his second save of the season.

At the plate, Explorers’ DH Sam Judah went 3-for-5 with RBI doubles in the third and fifth innings and an RBI single in the ninth. The Explorers wreaked havoc on the base paths with CF Eliezer Mesa, RF Peter Barrows and SS Leugim Barroso each stealing a base. Judah, Mesa, Barrows and Barroso combined for 10 hits in the game.

Despite a late RedHawks rally, the Trois-Rivieres Aigles held on to win 4-3 Tuesday night. Behind 1-0 in the bottom of the third, Trois-Rivieres CF Steve Brown connected for a two-out, three-run homer, which would prove enough support for Aigles’ starter Dan Britton-Foster. Britton-Foster threw seven innings of one-run ball, striking out seven while issuing just one walk to earn the win. A fifth-inning RBI single from Aigles’ LF Drew Miller provided some much-needed breathing room, which would come in handy when the RedHawks challenged in the eighth. Fargo-Moorhead 3B Ronnie Bourquin delivered a two-RBI single with the bases loaded to cut the Aigles’ lead to 4-3, but RHP Nick Sarianides worked out of the eighth-inning jam and pitched a scoreless ninth for his second save of the season.

Nine different Amarillo batters contributed at least one RBI in a 14-3 rout of El Paso. The Sox raced out to a 9-1 lead in the game’s first five innings, and the outcome was in little doubt during the latter four innings. Amarillo finished with 18 hits, including eight doubles and a fifth-inning three-run home run from 2B Trey Ford. Ford led the Sox with three RBI in the game. LF David Peralta and 3B Brandon Jones each had two RBI.

On the mound for Amarillo, Kristhiam Linares allowed two earned runs on four hits in 6.1 innings. Linares struck out five and walked one.

1B Mike Sheridan’s fifth-inning two-RBI double was the difference in Laredo’s 5-3 win against Sioux Falls. Sheridan’s clutch hit made the score 5-2, and Laredo’s bullpen did the rest.

Lefthander David Newmann allowed three runs in five innings to earn the win. Laredo’s bullpen held the Canaries to just one hit in the remaining four innings, and closer Mike Benacka handled the last three outs for his fifth save. The five Laredo pitchers combined to strike out 11 batters in the game.

The Lemurs grabbed a 3-0 lead in the first inning when LF John Allen, CF Sawyer Carroll, DH Palmer Karr and RF Jon Gaston hit four consecutive doubles. Canaries’ DH Tim Pahuta batted 3-for-4 with a double and an RBI in the loss.

A fifth-inning rally propelled the AirHogs to a 3-2 win against Kansas City. Kansas City CF Kennard Jones kicked off the scoring in the third with a sacrifice fly that brought home SS Felix Molina, but the AirHogs answered with one run in the fourth and two in the fifth to take the deciding lead. AirHogs’ RF Kenny Held singled home a run in the fourth to tie the game at one, and in the fifth inning Grand Prairie used a walk and hit batsman to plate two more runs. LF Brian Myrow scored a run in the fifth and led all batters with four hits.