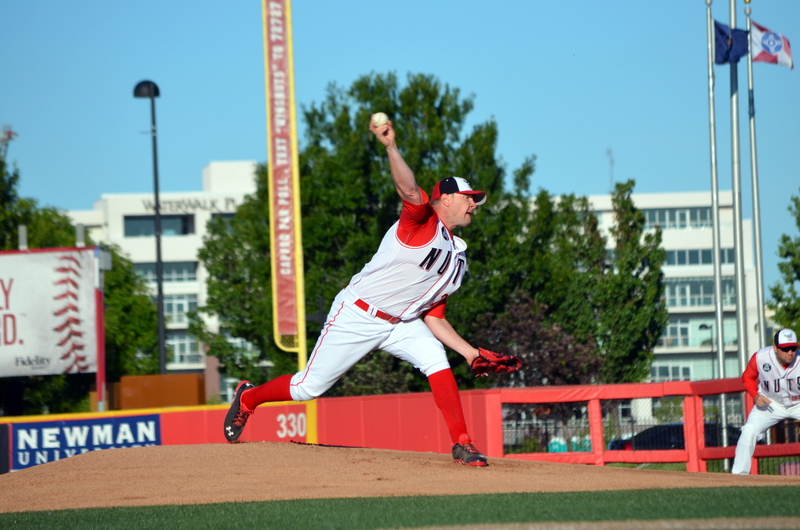 The Wingnuts starter Jon Link (pictured) was impressive on the bump and pitched a complete game with nine strikeouts as Wichita downed Gary SouthShore 8-2. Link allowed just two runs, both earned, on five hits. He has a strong season going and is now 6-1 with a 1.74 ERA but Monday was his first complete game.

A five-run seventh inning bolstered by DH John Rodriguez and CF Brent Clevlen put the Wingnuts out of the reach of the Railcats. Wichita led by just one run in the bottom of the seventh when Rodriguez doubled in a pair of runs. Two batters later, Clevlen belted a three-run homerun his first of the year. Rodriguez had homered earlier in the game and was 3-for-3 on the night with two runs and three RBI. Clevlen was 2-for-4.

Winnipeg’s starting pitcher Mark Hardy went the distance as his Goldeyes beat the St. Paul Saints 11-3. Hardy allowed nine hits and gave up three runs, including a first inning homerun to  SS Joey Becker, but controlled the Saints’ bats enough the rest of the way to earn the win. He walked just one batter in the game. Becker’s homerun only tied the score as 3B Amos Ramon homered in the top half of the inning for one of his two RBI.

C Luis Alen and SS Nate Samson were both strong at the plate as they each had three hits. Alen added an RBI and a run and Samson added two RBI and two runs.  For the Saints, LF Willie Cabrera was 2-for-4 with a run. Both RF Brandon Tripp and C Dwight Childs also had a pair of hits each.

The Lincoln Saltdogs cruised passed the Sioux City Explorers 10-2 with a huge sixth inning. The game was tied at two runs a piece in the middle of the sixth, but the Saltdogs quickly took hold of the game. Lincoln sent 12 batters to the plate, registered seven hits and scored eight runs. The Explorers needed to make two pitching changes to get out of the inning.

The inning started with LF Matt Forgatch getting hit by a pitch. He scored one a single from 3B Brian Embery. When Forgatch came up the second time he doubled in the last two runs of the inning. Forgatch was 2-for-4 in the game. CF Dan Carroll had a team-high three RBI as he went 2-for-4. Starter Eddie McKiernan picked up the win for his six innings of work.

A five-RBI game from LF David Peralta powered the Amarillo Sox past the El Paso Diablos 14-3. Peralta was 3-for-5 in the game and scored twice on his own to go with the five runs he knocked in. Three of those RBI came on a triple in the bottom of the sixth inning. He singled in a run an inning earlier as a part of the Sox’ seven-run rally. Amarillo DH Cory Patton also had a nice night as he was 4-for-4 with a run and an RBI. 2B/3B Trey Ford also added three hits and two RBI for the Sox.

El Paso was held to just four hits in the game and 2B Jose Garcia had half of them as well as scoring two of the teams three runs. Starter Ryan Mitchell got the win but reliever Matt Larkins had the more impressive line as he worked the last four innings without giving up a hit or a walk. Larkins picked up the save.

The Laredo Lemurs racked up 15 hits on their way to beating the Sioux Falls Canaries 13-3. Six of the Lemurs in the order had multi-hit games and SS Jimmy Mojica and LF John Allen each had three-hit games. Allen also had a solo homerun in the seventh inning. While the top half of the order was getting on base, the bottom half was bringing them home. C Brian Peterson, hitting in the seventh spot, had four RBI and his first homerun of the season.

2B Harrison Kain, batting behind Peterson, had two doubles and three RBI in the game. Starter Ryan Sasaki was tabbed as the winner for his five innings on the mound in which have gave up three runs on four hits. Four Laredo relievers combined to finish off the Canaries while allowing just one more hit.

After losing a three-run lead, the Grand Prairie AirHogs scored six unanswered runs in the last two innings to top the Kansas City T-Bones 9-4. The T-Bones took the lead on back-to-back RBI hits from 2B Jairo Perez and 1B Matt Padgettin the bottom of the seventh but the AirHogs responded in the eighth with a 3B/SS Ryan Pineda sacrifice fly followed by a two-RBI single by C Angel Flores. Three more runs in the ninth sealed the game for Grand Prairie. Flores and CF Keanon Simon both had team-high two RBI. Reliever David Quinowski earned the win for throwing five pitches and recording one out to end the seventh inning.

The Fargo-Moorhead RedHawks starter Alex Caldera pitched six scoreless innings and reliever Pete Levitt finished off the Trois-Rivieres Aigles with three more as the RedHawks won 8-0. Caldera scattered three hits and fanned five batters and Levitt allowed just one hit and struck out three. The win makes Caldera 4-2 on the season with a 3.40 ERA.

The RedHawks took the lead in the third inning when RF Buddy Sosnoskie hit his third homerun of the season to lead off the inning. The RedHawks put up three more runs that inning and another three in the fourth to give the pitching staff all the run support it needed. Sosnoskie was 2-for-5 with a team-high two RBI. For the Aigles, RF Jeremy Nowak and C Emerson Frostad produced all of the offense as both of them had two hits.

Photo courtesy of the Wichita Wingnuts.