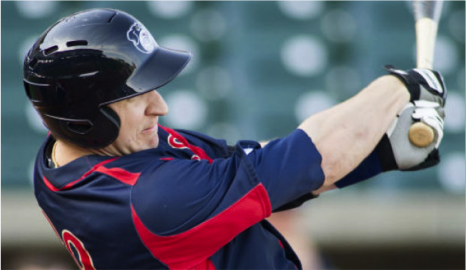 DURHAM, NC- The official statistician of the American Association, Pointstreak, has announced that Lincoln Saltdogs INF Ian Gac (pictured) has been named this week’s Pointstreak Player of the Week for the week ending June 1.

Gac went 16-for-27 with eight RBIs at the plate this week for the Saltdogs, including three games of three hits or more. In the second game of a doubleheader on Tuesday, May 27, Gac was 3-for-3 with a double and two runs scored against the Grand Prairie AirHogs, collecting a pair of RBIs in his team’s 7-5 comeback win. In a road contest Thursday, May 29 at the Winnipeg Goldeyes, Gac was 3-for-4 with a double and a run scored.

Gac’s best game of the week came Saturday evening, May 31 at the Goldeyes, when he was 4-for-5 with two home runs and four RBIs. The game was Gac’s second two-homer game of the season, joining a game at home against the Goldeyes on May 25.

The second-year Saltdog raised his average from .295 to .382 during the week, and now has a total of 13 RBIs, seven doubles and five home runs.

Gac previously was named the American Association Player of the Week for the week ending May26, 2013.

Fleming and his Saltdogs (8-9) open a four-game series against the Fargo-Moorhead RedHawks with a doubleheader at Lincoln’s Haymarket Park on Tuesday evening at 5:05 p.m. Central time.