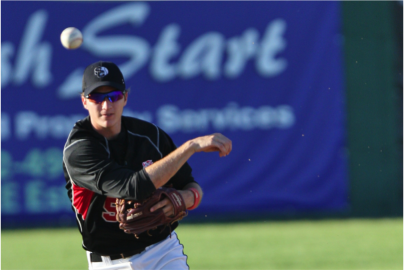 DURHAM, NC- The contract of Sioux City Explorers INF Nate Samson (pictured) has been sold to the Arizona Diamondbacks. He will be assigned to the Class AA Mobile BayBears in the Southern League, who are in the midst of a series against the Jackson Generals in Jackson, Tennessee.

Samson is in his second year in the American Association and first with the Explorers. He is hitting .335 (55-for-164) in 43 games this season with 23 RBIs, 12 doubles, a triple and two home runs. Samson has three four-hit games this season- May 31 at the Fargo-Moorhead RedHawks, June 8 at the St. Paul Saints, and June 15 at the Grand Prairie AirHogs.

Prior to joining the independent ranks, Samson played in the Chicago Cubs system for seven full seasons. His best season came in 2008 when he hit .292 with the Class A Peoria Chiefs and the Class AAA Iowa Cubs. Samson hit a career-high five home runs in 2011 with the Tennessee Smokies at Class AA, and his season high in RBIs was 47 in 2009 with the Class A Advanced Daytona Cubs and the Smokies.

Samson becomes the first Explorers player to be sold this season and the third American Association player picked up by Arizona.