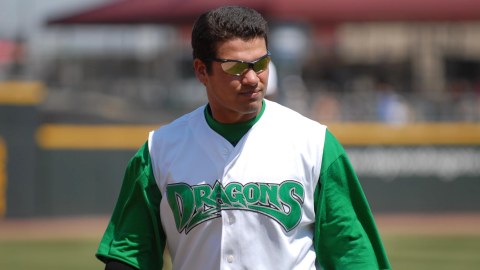 Onetime Sioux Falls and El Paso catcher Eddy Rodriguez probably faces an uphill battle to get back to the major leagues as a player, but he surely seems to have a nice future in baseball.

He has shuttled between the New York Yankees’ top two farm clubs in Scranton/Wilkes-Barre, PA and Trenton, NJ this season, earning accolades on numerous occasions. One of those came only days ago when one of the Yankees’ top prospects, Brady Lail, gave the Double-A Trenton bullpen a much needed night off following a 17-inning marathon the previous night.

Lail tossed a two-hitter for his first career complete game as the Thunder blanked Binghamton, NY, 3-0, and Rodriguez got huge praise. “The biggest thing for me was Eddy Rodriguez behind the plate,” the winning hurler said. “He called a good game. I don’t think I shook him off once all night.”

That seems to be typical Eddy Rodriguez, who got two games in the majors with San Diego three years ago including a dramatic break-in homer, but was relegated to coaching more than playing in the Tampa Bay system last season. He got married in the offseason, and, well, let him explain, as he did to The Scranton Times-Tribune.

“I had gotten a couple coaching offers from other teams,” Rodriguez said. “I really wanted to take a year off from baseball. I have been grinding it since I was 9, 10 years old, since I got here from Cuba (in a not-so-easy escape). We grew up dirt poor, in a trailer. Not to put anybody down for living in a trailer, because that’s how I grew up. But, that’s not how I see my life. I like being successful. I like competing. I’ve been grinding for everything I’ve ever been able to accomplish.”

Like the company man the 29-year-old always seems to be on his way to perhaps a fulltime coaching career, Rodriguez has played in 38 games between Classes AA and AAA this season, hitting a combined .185 with two homers and 14 runs batted in. And, most importantly, he has earned the praise of his pitchers.

Technically, Chris Coste never played in the American Association. But the catcher, most highly acclaimed for becoming a major leaguer for the first time at the age of 33 in 2008, is one of Independent Baseball’s best all time success stories, largely because he started in a non-major-league-affiliated league and stuck with it long after his four seasons with hometown Fargo (’96-’99) until he joined the Philadelphia Phillies for whom he even started as the DH in Game 1 of the ’08 World Series against Tampa Bay.

Coste was inducted into the Buffalo Bisons Hall of Fame a few days ago, being remembered for hitting .307 in 230 games for three consecutive playoff teams from 2000-2002. The Buffalo News reported on one unusual game in that span as it reviewed his career:

“On Sept. 1, 2002, Coste did it all in a 6-5, 16-inning Buffalo win at Syracuse,” the newspaper reported. “Seriously. He was the catcher for the first 12 innings – then pitched the last four innings in relief to get the win, even though he allowed a tying run in the 15th. Coste had been a pitcher at Division III Concordia (Minn.) College.

“To this day, that was the most fun I’ve ever had playing in a game in the minors – and I went 0 for 6 at the plate and broke my hand in the 13th when I got hit with a pitch,” Coste told the newspaper. “It was one of those nights. I broke my hand so it was tough to swing through the playoffs and my elbow hurt for three months. I have a hard time explaining that game to people. They don’t believe me.”

Previously the chief spokesman for Commissioners Bowie Kuhn and Peter Ueberroth, Bob Wirz has been writing extensively about Independent Baseball since 2003. He is a frequent contributor to this site as well as writing his blog, www.IndyBaseballChatter.com.