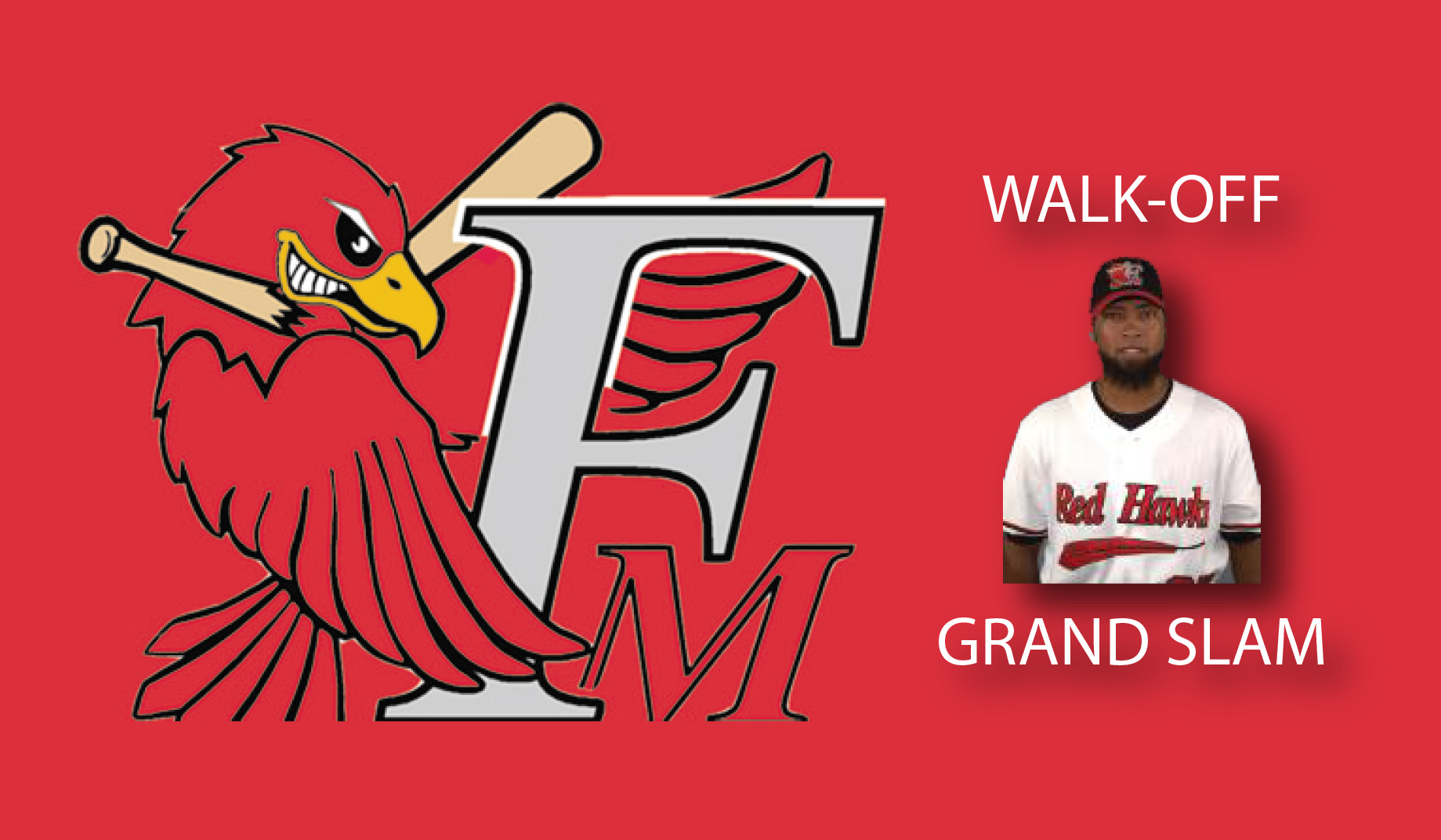 The Fargo-Moorhead RedHawks turned a two-run deficit into an 8-4 win against the Sioux Falls Canaries with one of baseball most thrilling feats – a walk-off grand slam.

The RedHawks entered the bottom of the ninth inning trailing 4-2 but C Charlie Valerio (2-for-4) tied the game with a one-out, two-run home run, scoring 3B Tommy Mendonca (who drew a leadoff walk) in the process. Fargo-Moorhead proceeded to load up the bases with a single from SS Leobaldo Pina (2-for-4), a walk and a catcher obstruction, setting the stage for DH Keury De La Cruz. With two outs, De La Cruz pelted a 1-0 delivery over the wall for the walk-off grand slam.

The blast was De La Cruz’s third of the year while Valerio recorded his fourth. For the Canaries, SS Blake Schmit went 3-for-4 and scored twice.

For the second consecutive game, the St. Paul Saints earned an extra inning win as they toppled the Texas AirHogs 7-4 in 10 innings.

The game was tied for the final two innings and went to the 10th knotted at 4-4. In the top of the extra frame, RF Max Murphy doubled to score both 2B Josh Allen and C Justin O’Conner. In the next at-bat, 1B Brady Shoemaker singled, allowing Murphy to score and give the Saints a three-run lead. Murphy, Shoemaker and O’Conner each had two hits in the game. SS Noah Perio Jr. led the way at the plate as he went 4-for-6 and scored once. Allen went 3-for-5 with an RBI and OF Richard Prigatano also went 3-for-5 with three RBIs including a two-run home run. For the game, St. Paul racked up 17 hits.

For the AirHogs, CF Greg Golson went 2-for-4 and LF Dillon Thomas had two RBIs.

Wichita CF Zach Nehrir doubled twice to provide both of the runs in the Wingnuts’ 2-0 win against the Cleburne Railroaders win in game one of Wednesday’s doubleheader.

Nehrir (2-for-3) plated the first run of the game in the bottom of the fourth inning when he doubled home 3B Tony Thomas. In the sixth, Nehrir doubled to center field to push DH Logan Trowbridge across. Those two runs proved to be enough for the Wingnuts to seal the win. Starting pitcher Casey Harman earned the win on the mound for throwing six shutout innings and giving up four hits while striking out six batters. Reliever Daniel Tillman threw a perfect seventh to take the save.

Starting pitcher Patrick Mincey took the hard-luck loss as he worked all six innings and gave up just the two runs on four hits and struck out four batters. RF Cameron Monger had two of the Railroaders’ four hits.

The Wichita Wingnuts fell behind early in the night cap of Wednesday’s doubleheader but a six-run sixth inning lifted them to an 8-4 win against the Cleburne Railroaders and a sweep of the twinbill.

Wichita trailed 3-2 heading into the bottom of the sixth inning but SS Leo Vargas started things off with a single and scored when 2B Ryne Willard singled to center two batters later to knot the game at 3-3. The tie lasted just one at-bat as 1B Abel Nieves singled home CF Logan Watkins three pitches later. Willard scored on a single from C Logan Trowbridge and Nieves scored on a wild pitch later in the inning. Vargas brought the rally to a close as he singled home Trowbridge and RF Zach Nehrir.

Trevor Sealey scored after CF K.C. Huth singled in the ninth but starting pitcher Jordan Cooper ended things without allowing the Railroaders to really threaten the lead. Cooper went the distance and allowed four runs, just one earned, on five hits. Both DH Rafael Palmeiro and 3B Patrick Palmeiro recorded an RBI in the game.

In the seventh inning, the Kansas City T-Bones turned a one-run game into a comfortable 10-2 win against the Sioux City Explorers by posting nine runs.

The T-Bones were trailing the Explorers 2-1 before the offensive explosion in the bottom of the seventh. In the pivotal frame, Kansas City sent 13 batters to the plate, recorded six hits, two walks, one hit by hit, took advantage of one error and scored seven of the nine runs with two outs. A double from DH Cal Towey that plated two runs and a triple from CF Johnny Davis that scored three highlighted the outburst.

Davis was one of three T-Bones to have three hits in the game as 2B Dylan Tice and 1B Nick Torres also did so. For the Explorers, RF Michael Lang recorded a trio of hits himself.

The game between the Chicago Dogs and the Gary SouthShore RailCats was postponed due to inclement weather and heavy rain in the area. It will be made up as a part of a doubleheader tomorrow, May 31, beginning at 5 p.m.

The game between the Lincoln Saltdogs and the Winnipeg Goldeyes was postponed due to inclement weather. It will be made up tomorrow, May 31, as a part of a doubleheader scheduled to begin at 11 a.m. Central Time.