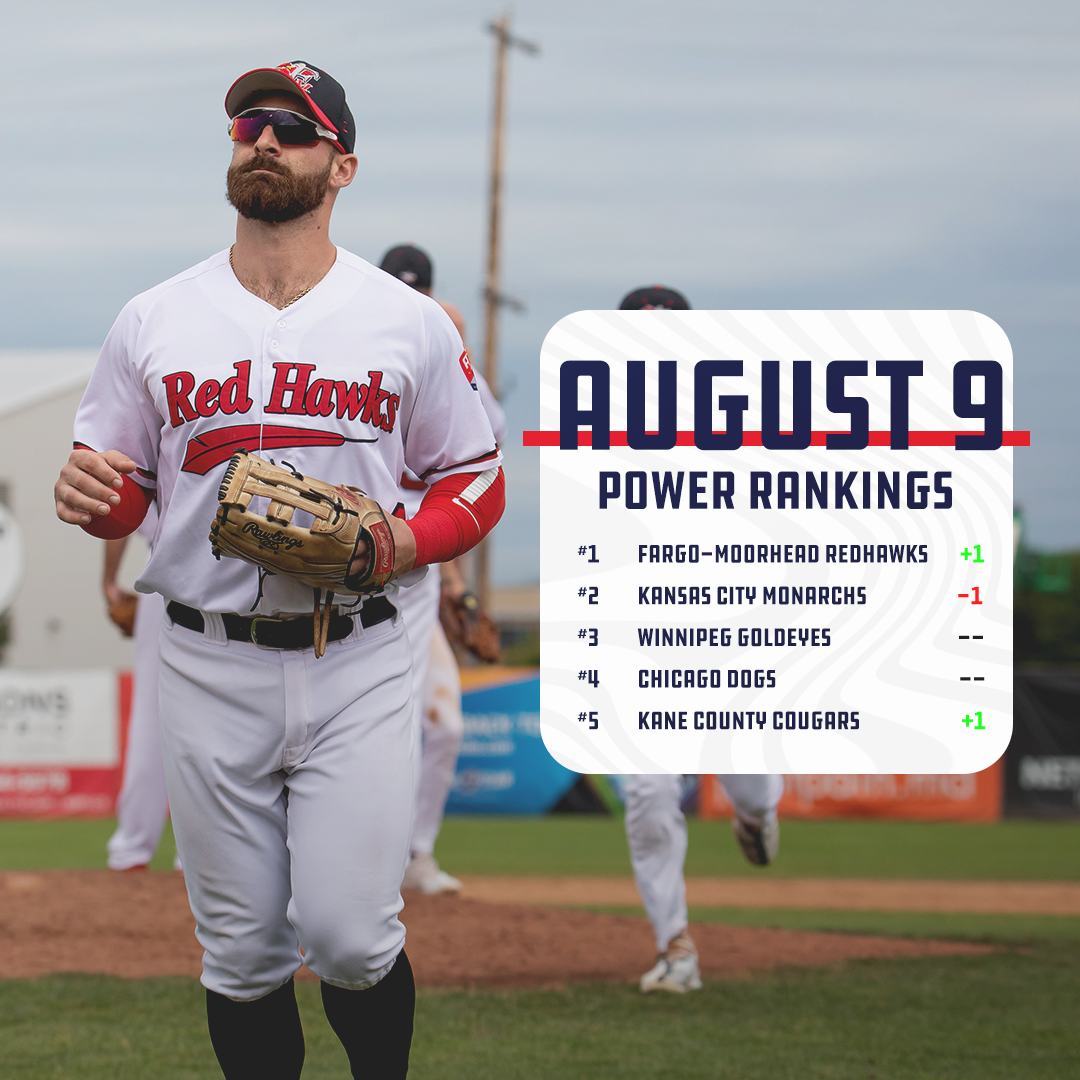 The RedHawks are back on top of the West Division standings, and my rankings for this week. Peter Maris is on a tear, hitting .560 over the last week with three homers and 11 RBIs, enough to earn Pointstreak Batter of the Week honors. Plus, Drew Ward is back. The RedHawks’ DH was on Player of the Year pace before an injury on the eve of the All-Star break kept him out for nearly a month. He wasted no time in getting back to form, hitting his 15th home run of the season in his first game back.

The Monarchs are in the midst of their longest losing streak of the season, having dropped five games in a row and six of their last seven. That includes a six-game stretch against a surging Kane County side that saw the Monarchs go 1-5. Still, manager Joe Calfapietra has made some big moves this week to improve the club, signing former Major Leaguer Mallex Smith, bringing back 2021 AAPB Postseason All-Star Ryan Grotjohn, and trading for Gio Brusa, a 2022 All-Star with the Dockhounds. Jan Hernandez has resumed swinging a bat in his rehab from a shoulder injury, looking likely to be back for a Monarchs playoff run.

Winnpeg has a case to move up to No. 2 in these rankings. Fortunately for Rick Forney’s team, they’ll have the chance to make that case on the field before too long. Winnipeg plays Kansas City 10 times before the end of the season, starting with a three-game set on August 16. Goodness knows how many homers Max Murphy will have by that point. The veteran slugger hit his league-best 26th of the year on Sunday, and has club and league records in his sights.

Butch Hobson’s team started the week strong, sweeping Lake Country on the road to continue their dominance of the DockHounds. (They’re now 9-0 against Lake Country, with all but two of their wins coming by five or more runs.) They finished their week by getting swept at home by Sioux City, including back-to-back shutout losses. All-Star catcher Ryan Lidge continues to produce, hitting .364 over the past week with 10 RBIs. An important three-game set with the Gary SouthShore RailCats kicks off the Dogs’ week.

The Cougars are hitting their stride, making a statement with five wins in six games over Kansas City last week. Jimmy Kerrigan’s 25 homers on the season are impressive, but it’s been a full-team effort for the Cougars. Outfielder Ernie de la Trinidad hit .417 against the Monarchs, including a 6-for-6 game on Thursday where he hit a home run on the game’s second pitch. The Cougars’ pitching staff has continued to impress, with Jose Fuentes throwing seven innings of three-run ball to beat the Monarchs on Sunday afternoon. All-Star Game starter Ryan Tapani struck out the side to get his first save of the season on Sunday. The Cougars head to Cleburne for a six-game series this week looking to keep it rolling.

Previous PostRamirez, Washington Have Big Nights in Winnipeg WinNext PostMonarchs Machine Turns Back on as they Shutout the Explorers