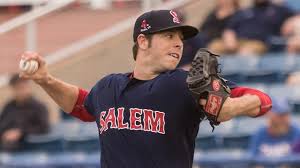 The Boston Red Sox are drawing considerable attention these days because of the lengthy hitting streaks of two of their young stars, Jackie Bradley, Jr. and Xander Bogaerts, but with starting pitching always a premium the American League East-leaders also should take notice when one of the minor league pitchers puts together an impressive run.

Aaron Wilkerson, who credits his time in the Frontier League and a longer stay in the American Association as a turning point in his career, put together 21 consecutive scoreless innings over a stretch of four starts to vault to the second best earned run average in the Eastern League.

Only turning 27 on Wednesday, the 6-foot-3 right-hander has a 2-1 record and 1.83 ERA for eight starts at Portland (he also started once for Triple-A Pawtucket) in which he has allowed only 28 hits in 44.1 innings. Wilkerson also has the third best WHIP record (walks+hits-per inning) of 0.95 and is fourth in strikeouts (48) in the Double-A circuit.

“I’m blessed,” Wilkerson told MiLB.com recently. “It hasn’t been the easiest road for me. I was at the point where I was going to hang the cleats up for a while (after not being drafted in 2013). Then the whole Independent ball thing came through at a critical time in my life (three games in Florence, KY followed by parts of two seasons at Grand Prairie in the American Association), so it was either keep pursuing it that way or let baseball go. I’m really, really happy with the decision that I made.”

Wilkerson had consecutive starts of six innings twice and 7.1 another time without allowing an earned run, and left his last start with a lead even though he had given up three runs in five frames.

Gonzalez, Schultz on the Move

In recent player transactions of note, 2015 Wichita shortstop Alberto Gonzalez has been promoted by Detroit from Class AA Erie to AAA Toledo and onetime Grand Prairie right-hander Bo Schultz, making his way back from injury, was sent outright by Toronto to Triple-A Buffalo.