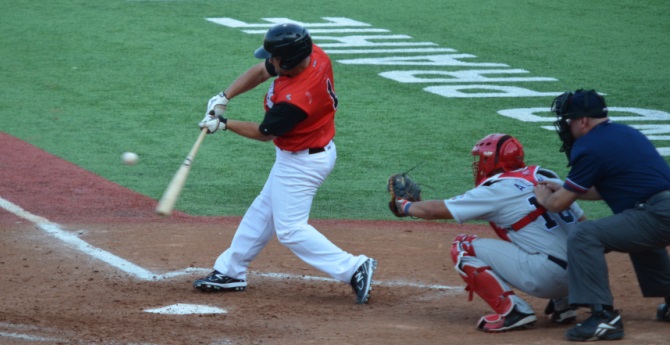 Two RBI from LF Brian Myrow (pictured) and three more from RF Kenny Held helped the Grand Prairie AirHogs come back to beat the Newark Bears, 5-3. Newark started out strong, with runs in each of the first three innings, but that was all the Bears could muster, and Grand Prairie pulled away with a three-run fifth inning. Trailing 3-0 in the bottom of the third, the AirHogs got on the board with a Myrow sacrifice fly, which scored SS Ryan Pineda. With the bases loaded in the fifth, Held smacked an 0-2 offering for a triple, bringing in all three base runners, including 3B Juan Richardson for the go-ahead run. Myrow added to the AirHogs’ lead in the sixth with an RBI single to make the score 5-3. On the mound, AirHogs’ southpaw Jorge Lugo (3-1) pitched five innings of two-run ball to earn the win, and closer Patrick Mincey sat the Bears down in order in the ninth for his ninth save.

The RedHawks exploded for 17 runs, highlighted by a 10-run seventh inning, in a 17-0 rout of the Kansas City T-Bones. 2B C.J. Retherford led the RedHawks with four RBI, and 1B Keith Brachold, 3B Ronnie Bourquin and RF Buddy Sosnoskie each had three RBI. Bourquin got Fargo-Moorhead started in the second inning with a two-run homer. The RedHawks led 5-0 entering the seventh, and would keep piling it on in that inning with 10 runs on just four hits, including a two-run single from Retherford and a pair of three-run homers from Brachold and Sosnoskie. Redhawks’ lefty Jake Laber (4-3) made good use of his run support, pitching six scoreless innings. He struck out six, allowing five hits and two walks.

The Goldeyes needed extra innings to put away Gary SouthShore in the first game of Saturday’s doubleheader. After the scheduled seven innings, the teams were tied at two apiece, but a ninth-inning RBI single from RF Josh Mazzola put Winnipeg ahead for good. Later in the ninth, 2B Nick Liles drove in Mazzola with a double — his third hit of the game — and 1B Casey Haerther scored Liles with a single to secure the lead. Haerther led all hitters with two RBI in the game. Winnipeg LHP Brendan Lafferty (1-1) was the game’s winning pitcher after he threw a scoreless 2/3 of an inning in the eighth. Goldeyes’ closer Patrick Keating earned his seventh save of the season by shutting down the RailCats in the ninth.

In the second game of a doubleheader, the RailCats reversed the score on Winnipeg, using an RBI from each batter No. 6 through No. 9 in the lineup to win 5-2. Tied 2-2 in the bottom of the fourth, RailCats’ 3B Brian Kolb led off the inning with a single to right field. The RailCats then loaded the bases, without hitting a ball out of the infield, for 2B Chase Tucker, who grounded out to bring in the go-ahead run. Gary SouthShore LHP Ari Ronick (4-3) pitched five innings of two-run ball to earn the win. RHP Ian Durham closed out the game for the RailCats for his third save of the season. Goldeyes’ 2B Nick Liles batted 3-for-3 with a stolen base, and 1B Casey Haerther hit 2-for-4 with an RBI double in the loss.

Wichita’s early lead held despite a late Sioux City charge in an 8-7 victory for the Wingnuts. Wichita took a 4-1 lead in the first on a wild pitch, 3B Abel Nieves’ RBI ground-rule double and a two-RBI single by C Cole Armstrong. Sioux City cut the lead to 5-3 in the fourth, but Wichita answered back with three more runs in the bottom half on an RBI single CF Brent Clevlen and a two-RBI double from Nieves to make it 8-3. The X’s rally came up one run short in the eighth. With the bases loaded, Sioux City C Alberto Espinosa doubled in three runs, and then DH Adrian Martinez drove in Espinosa with a double of his own. The rally ended there, though, as Wichita reliever Andrew Aizenstadt stranded Martinez at second by striking out 3B Brian Bistagne to end the inning. Wichita closer Josh Dew pitched a 1-2-3 ninth to record his eighth save of the season. The win went to right-hander Christopher Smith (3-3), who let up just one earned run on four hits over seven innings. Smith struck out seven and walked two.

St. Paul right-hander Mark Hamburger (2-2) held the Canaries to three runs over seven innings to lead the Saints to a 6-3 victory. 3B Brad Boyer continued to rake for the Saints, batting 2-for-4 with three RBI, a run scored and a stolen base. Boyer and C Dwight Childs launched solo home runs in the sixth and seventh innings, respectively, to make it 6-1. The Canaries cut St. Paul’s lead in half in the sixth, when SS Cory Morales scored on a double play and DH Tim Pahuta hit a solo home run, but the Saints’ bullpen righted the ship in the eighth and ninth, concluding with closer Matt Meyer’s ninth save.

Lincoln starter Pete Parise (4-3) struck out nine and scattered one run on seven hits over 7 1/3 innings to lead the Saltdogs to a 4-1 win against El Paso. Down in the count 0-2 in the second inning, Saltdogs’ C Jose Gil worked the count full and then homered to end a nine-pitch at-bat, giving Lincoln a 1-0 lead. CF Dan Carroll scored the eventual game-winning run in the third on a wild pitch, and RF Mike Provencher made it 3-0 in the sixth on an RBI single. 3B Jeff Squier scored on an error in the seventh for Lincoln’s fourth run. The Diablos’ lone run came on C Moises Montero’s solo home run to lead off the eighth. Lincoln closer RJ Rodriguez pitched a scoreless ninth to pick up his 17th save.

1B Joe Weik drove in two runs in a three-run seventh for the Sox, helping them beat Laredo, 3-2. Amarillo 3B Brandon Jones led off the seventh with a solo shot, and Weik delivered four batters later with a two-RBI double. The Lemurs got on the board first in the fourth, when they used a double steal to put runners on second and third, which set up DH John Alonso to drive in a run with a groundout. Amarillo starter Ryan Mitchell struck out the next batter to end the inning, stranding a runner on second. Mitchell (5-2) allowed just one run and one hit over 6 2/3 innings, striking out seven and walking four in the win. Amarillo left-hander Cory Patton came into the game in the ninth and allowed a solo home run to Laredo LF Palmer Karr before striking out two of the next three batters for his second save.