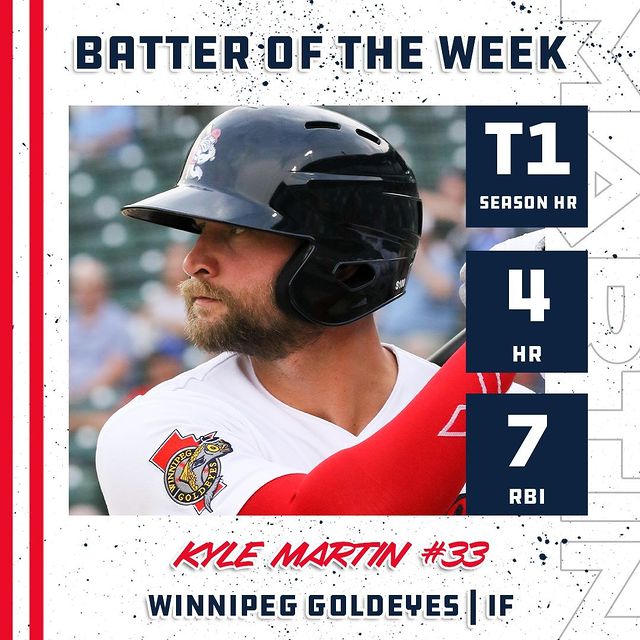 Martin is in the home stretch of a historic season for Winnipeg. The third-year Goldeye heated up this past week, clubbing four home runs in five games (not counting a game that was suspended in the ninth inning). He’s hit
28 home runs on the season, just three shy of the Association record His official RBI total sits at a franchise-record 91, 12 short of the league mark.

Smith has become one of the most effective starting pitchers in the American Association. He was dominant in both of his starts this past week, throwing seven innings of one-run ball in each. He struck out eight in his first outing on Monday, August 9 vs. Lincoln, following that up with a 14-strikeout performance Saturday, August 14 vs. Houston. That performance put him atop the Association’s strikeout leaderboard with 109 in 92.1 innings.

Born in Detroit, Michigan, Smith is in his third year with the Milkmen and fifth in the Association. He moved into the starting rotation in 2021 after coming out of the bullpen for much of his career. He earned a 1.88 ERA with Milwaukee over 23 appearances in 2020, helping the Milkmen to an American Association championship. A fourth-round draft pick by the Boston Rex Sox in 2013, Smith reached Triple-A in the Diamondbacks system in 2016. This is Smith’s second weekly honor of the season; he was named Pitcher of the Week for the week ending July 18 for a complete-game shutout performance.